Summary: Yes, it’s happening again. There was a significant Google algorithm update on 11/30/16, following an update on 11/10/16 that was partially reversed on 11/18/16. And the 11/30 update is showing a connection to previous quality updates (AKA Phantom). Let’s explore what’s going on in Google Land. When writing about the November 10, 2016 Google algorithm update, I mentioned this has been one of the most volatile falls I’ve seen from an algo update perspective. Well, now we are nearing winter, and the volatility hasn’t calmed down! I picked up a substantial algorithm update starting on November 30, 2016, with many sites seeing significant movement (both up and down). Some sites absolutely surged, while others tanked.

But to make matters even more complicated, I’m now seeing partial reversals starting on December 13, 2016. So just like the November 10 update, there are some sites reverting back to their pre-November 30 levels. It’s important to note that not all sites are reverting. Some have stayed at their new levels, while others have either surged more or dropped more.

Yes, it’s even a crazier time in Google Land, which is saying a lot given the amount of changes Google pushes out on a regular basis. Remember, there are hundreds of updates rolling out each year, but only some are significant. Those are the updates I typically cover here. For example, the June 29, 2016 update, November 10, 2016 update, etc.

Significant movement on 11/30. It was BIG.
On 11/30 I started to see movement across a number of sites I have access to. I saw some sites start to jump up, while others saw downward movement. In addition, I had a number of companies reach out to me after seeing substantial movement (both up and down). For example, here are two examples (and the second has ties to the 11/18 update):

Reverse the engines! Partial reversal on 12/13 (again)…
{Update: December 15 – SEMrush database update impacting 12/13 numbers}
I reached out to SEMrush about some of the severe spikes I was seeing starting on 12/13 and they got back to me this morning. There was a database update that could be causing some large spikes on certain sites. That doesn’t impact the 11/30 or 12/8 trending, but it is impacting the extreme spikes seen on 12/13. Note, I’m still seeing movement on some sites impacted by the 11/30 update during the 12/13 and 12/14 timeframe, but not as extreme as what SEMrush was showing. And now Barry Schwartz is reporting a possible update on 12/15. Like I said earlier, this is one of the most volatile few months from an algorithm update standpoint I’ve ever seen.
————————————————–

For example, here are a few reversals:

But again, some sites are seeing further gains or continued drops starting on 12/13. Here is one seeing an increase on 11/30 with a surge on 12/13:

One thing is for sure. Google is either testing like mad, or they are having a very tough time with the algo update. Or maybe it’s both. Again, welcome to Google Land. :)

Connections to the November 18 rollback:
When analyzing sites seeing impact, it was easy to see that some had a connection with the 11/18 update. This leads me to think that Google has been refining whatever they rolled out on November 10. I can’t say for sure that’s what is going on but it sure makes sense. Again, some sites saw a complete reversal of the impact from 11/10 on 11/18. Again, that leads me to believe Google was either testing the mobile-first index or there were flaws in the algo.

And if you think Google wouldn’t roll out a flawed algo, then go read my post about the movie blog fiasco from 2014. The entire algo update was rolled back 10 days later. All of the sites that got pummeled reversed course. Here’s an example of one site that was impacted back in 2014:

Now I’m seeing similar things while analyzing sites impacted by the 11/30 update. That includes mobile popups, interstitials, mobile UIs breaking, and other horrible mobile UX problems. I can’t say for sure if we’re seeing another test of the mobile-first index in action, but we very well could be.

Here’s one of my favorites from analyzing this update: 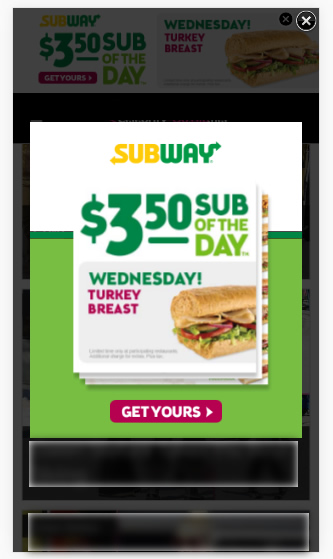 Low-quality user engagement problems (Phantom):
Beyond just mobile problems, I saw many of the usual suspects from a Phantom standpoint. If you’re not familiar with Phantom, then read my two-parts series about Google’s quality updates on Search Engine Land.

I saw many “low quality user engagement” problems while analyzing the 11/30 update. That included ads weaved into content, broken UIs, aggressive monetization (in several forms), and more. For some sites, it was hard to distinguish the real content from the ads. I mistakenly clicked a few ads and was whisked downstream to advertiser sites several times. And some of those sites were overly aggressive with their own tactics. Again, that’s a double-whammy from a user experience standpoint.

What You Can Do:
If you were impacted by the November 30 update, I highly recommend:

Summary – The Crazy Fall of Algo Updates Continues… Stay Tuned.
Again this is a developing story, and I’ll try to update this post with more information as I analyze more sites impacted by the November 30, 2016 update (and the reversals I’m seeing that started on December 13, 2016.)

As I mentioned earlier, the fall of 2016 has been one of the most volatile I have seen. And the volatility continues with the 11/30/16 update (and partial reversals on 12/13/16). I recommend checking your stats as soon as possible to see if you’ve been impacted. And if you have, follow the recommendations I provided above (and in my other posts about Google’s algo updates). That’s how you can surface potential problems causing the drop. Again, I’ll try to update this post with more information soon.