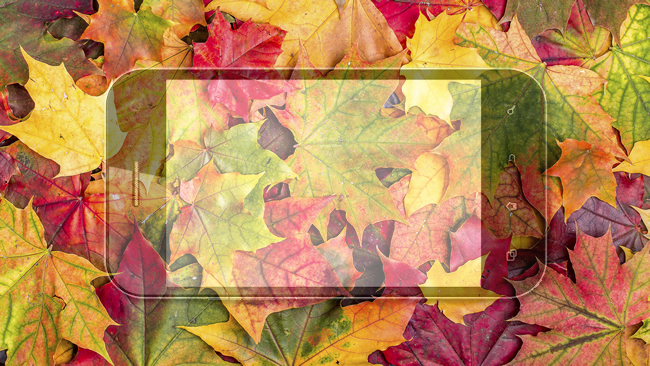 {Update: Saturday, November 19, 2016 – I saw reversals starting yesterday, November 18 (both recoveries and drops), which supports my theory that this was the mobile-first index being tested. I have provided more information below at the end of this post about what I’m seeing — including screenshots.}

The fall of 2016 has been one of the most volatile ones I have seen in a long time algorithm update-wise. We started with a local spam update and a quality update on 8/31 (simultaneously), then we had Penguin 4 roll out in multiple stages in September and early October, and then I picked up two more core ranking updates (which I hope to write about soon). But now we have another update that started around 11/10, and some sites are seeing significant movement (either up or down).

I’ve been digging into sites that have been impacted in order to analyze each situation. Here are some screenshots of the movement I’m seeing search visibility-wise:

When checking the search history of various sites that have been impacted, I am seeing a lot of connection to previous quality updates. For example, here is a site impacted on 11/10/16 that was also impacted by several other quality updates.

Now, based on what I’ve seen, it’s hard to say if this was just a quality update, or if there is another component at work. One thing is for sure, I kept surfacing an interesting finding across sites that were impacted – and it involved mobile. And with Google announcing on 11/4 (just days before we saw this update) that they were beginning to test a mobile-first index, the timing is very, very interesting.

The Connection Between Mobile Problems and Negative Impact
So, during the June quality update, I mentioned that I saw sites recovering that had improved their mobile setup. I speculated that maybe Google was handling the mobile version of the urls differently than the desktop (which would be a huge change). Here’s that segment from my June post:

Well, when checking pages that dropped across sites negatively impacted by the November 10, 2016 update, I saw a lot of mobile problems. That included popups, interstitials, render problems, UIs breaking, thinner and disorganized content on mobile urls, and more.

For example, here’s a nice one that smacked me in the face when checking the page on mobile: 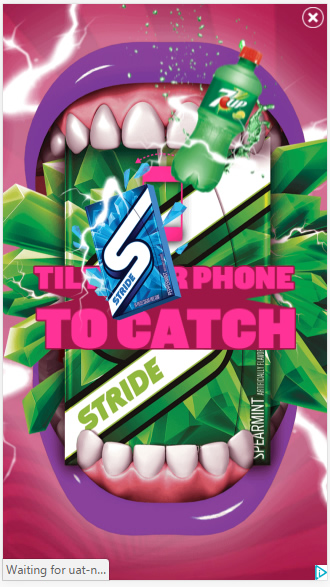 And if you’re thinking, hey, Google’s coming out with a mobile popup algo on January 10, so that can’t be the case now! Think again. With the mobile-first index, Google will index the mobile page as the canonical url, and if you’re providing a popup or interstitial, Google can see that as your primary content. I confirmed that with Google’s John Mueller last night. See the tweet below. 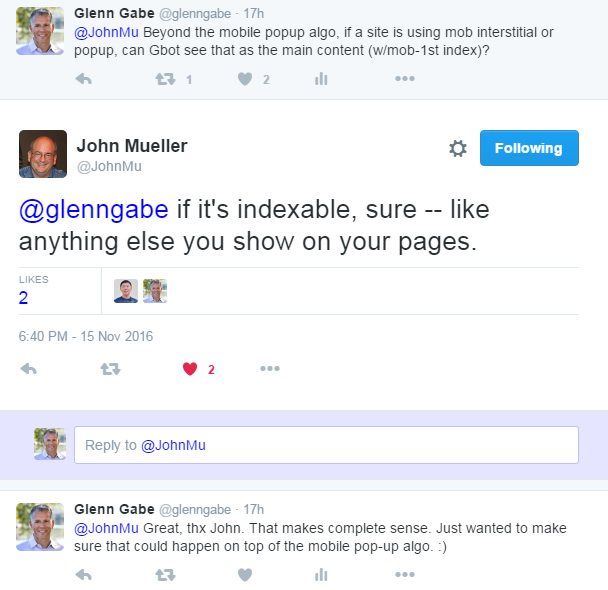 Beyond popups and interstitials, I came across numerous situations where the mobile UI was breaking. For example, the content would render, but the user could move that entire block of content around (by swiping). That was clearly a tech problem. And when you did that, here’s what the viewport could look like: 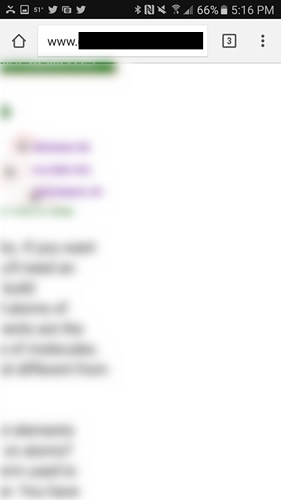 Anyway, I saw enough mobile problems on sites negatively impacted that it had me thinking we could be seeing the mobile-first index in action. I can’t say for sure that’s the case, but the timing makes sense, the problems I’m seeing make sense, etc.

Sites Seeing Positive Movement = Solid Mobile Setup
On the flip side, I analyzed a number of sites seeing positive movement during the 11/10/16 Google update, and they provided a clean and strong mobile setup. Many were responsive, did not provide crazy popups or interstitials, did not have UI problems, etc.

Here is the search visibility from a site seeing an increase during this update (and it provides a solid mobile setup):

And here is an example of rankings jumping for another site seeing positive movement based on the update. Some rankings jumped +80, +41, +31, etc.

———————————–
Important Update: Reversals Starting On Friday, November 18:
I have seen reversals of the impact from the November 10, 2016 algorithm update starting on Friday, November 18. Sites that surged are dropping back down and sites that dropped are recovering. This supports my theory that the mobile-first index was being tested. Here are two examples of reversals:

So if this test tells us anything it’s that the mobile-first index can indeed cause significant movement in the SERPs. I highly  recommend checking your mobile setup (as I explain below) and making sure your mobile pages contain sufficient content, don’t have render issues, etc. We don’t know the exact date of the full rollout of the mobile-first index, but it’s clearly getting close. Stay tuned.
———————————–

I’ll try and post more as I analyze additional sites impacted by the 11/10 update. In the meantime, I recommend checking your stats to see if you’ve been impacted (either positively or negatively). And if you’ve been negatively impacted, check your mobile setup. Are there barriers, broken UIs, content problems, or other issues you are presenting to users? And content-wise, make sure you are providing the full content on your mobile page (if you are using separate mobile urls).

One thing is for sure, this has been a very interesting update to analyze. The timing, and findings, lead me to think we just might be seeing the mobile-first index in action. Stay tuned. :)