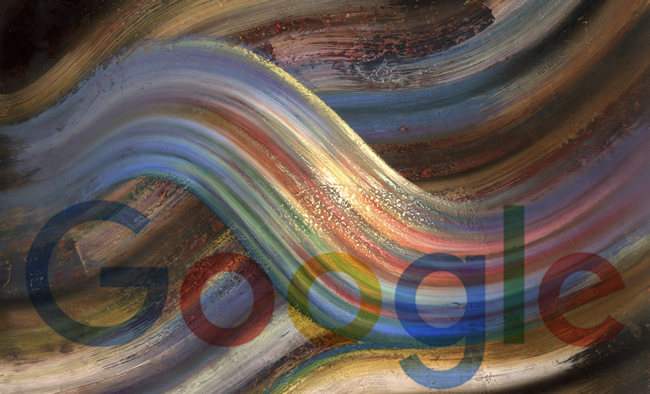 2015 has been an incredibly interesting year from a Google algorithm update standpoint. Although there weren’t many confirmed updates like previous years, it was still a relatively volatile year algo-wise. We had the mobile-friendly algorithm released in April of 2015, Phantom 2 confirmed in early May, and then Panda 4.2 in July.

Although those are three confirmed updates by Google, there were absolutely other significant updates that caused significant movement in the SERPs this year. And in my opinion, several of those updates seemed directly connected to “content quality” like Panda and/or Phantom are.

Note, Google can roll out hundreds of updates per year, but many of those are minor and do not cause major changes in rankings and/or traffic. Actually, John Mueller explained that they rolled out over one thousand changes in 2014. It’s important to understand that the updates I’m covering in my post today would be categorized as significant based on major gains or losses of Google organic traffic overnight.

The Importance of Identifying Unconfirmed Updates For Webmasters
For business owners and webmasters, it’s incredibly important to understand the algorithm updates that have impacted a specific domain. I mentioned that in my previous Search Engine Land column about performing a Search History Analysis. If you don’t know what hit you, then you cannot have a solid strategy for attacking those problems and designing the right remediation plan.

But if you do have a good understanding of which algorithm updates have caused increases or decreases in traffic, then you can analyze the damage through the lens of the update that impacted the site. And that’s a much stronger way to go for companies looking to recover their Google organic search traffic.

I’ll first go through the various unconfirmed updates that have rolled out in 2015 and then explain more about their apparent ties to “content quality”. Again, they definitely seemed connected to Panda and The Quality Update (AKA Phantom 2) based on analyzing many sites that were impacted throughout the year. And if you’re wondering about the November 19 update, I cover that at the end. Based on what I’m seeing, it looks very similar to the others I mention in this post. Let’s begin.

February 5th 2015
It wasn’t long before we saw a significant update in 2015. Specifically, there was a lot of movement on 2/5/15. Based on the large Panda dataset I have access to, as well new companies reaching out to me about a drop in traffic, it was clear there was some connection with “content quality”. Also, many of the sites that were impacted had previously been impacted by Panda. There were many claims throughout the industry of drops or gains in traffic starting on 2/4 and 2/5.

Again, it’s important to note that a number of the companies that experienced a large drop on February 5, 2015 had been previously impacted by Panda updates. I saw it time and time again. And although some claimed it was entirely focused on ecommerce sites, that’s definitely not the case. I know many sites outside of ecommerce that were hit too. It’s also important to note that Barry Schwartz reached out to Google to see if it was Panda or Penguin-related and was told that wasn’t the case.

So definitely take a hard look at February 5, 2015 if you have experienced a drop in Google organic traffic this year. It very well could have been the 2/5 update, which again, seemed to be heavily focused on content quality.

Side Note: RankBrain Introduced
It’s worth noting that RankBrain supposedly started rolling out in early 2015. It doesn’t sound like it had fully rolled out by February, so I’m not sure if it had any impact on the 2/5 update. That said, any algorithm that’s helping Google handle the long tail of search (which is massive), is important to document. Personally, I think the 2/5/15 update had more to do with content quality factors being baked into Google’s core ranking algorithm. More about this soon.

Phantom 2 – Early May 2015
I’m including this confirmed major algorithm update in the list since it was originally unconfirmed. Google never intended to release any information about Phantom, but ended up doing so based on the buzz it generated. If you are unfamiliar with Phantom 2, I picked up what looked to be a major algorithm update in late April and early May of 2015 that impacted many sites across the web. And I’m referring to major swings in rankings and traffic. I named the update “Phantom” based on its mysterious nature.

Based on how large the update was, I ended up being interviewed by CNBC soon after writing my post, and the CNBC article went live the next day. Google finally revealed that there was an update, and it was a change to its core ranking algorithm with how it assessed “quality”. And if you pay attention to SEO at all, then you know that’s a really big deal. By the way, the update has been called “The Quality Update”, but I’m sticking with Phantom. :)

You can read more about Phantom in my post containing my findings, but it was a huge update that seemed to target many factors that Panda also targeted. And that got me thinking that Phantom could actually be the beginning of Panda being incorporated into Google’s core ranking algorithm. It’s hard to say if that was the case, or if that could have started during the 2/5 update, but both looked to heavily target content quality issues.

July 2015 – A Note About Panda 4.2
The summer brought a confirmed update in Panda 4.2 on July 18, 2015. And it wasn’t pretty, since it was an extended rollout based on “technical problems” Google was having with the algorithm update. Since 7/18/15, many companies have been eagerly checking their reporting to see if P4.2 has impacted their Google organic traffic. Unfortunately, many previous Panda victims (especially those impacted by Panda 4.1 in September 2014 and the 10/24/14 update) are still waiting for recovery. And that’s after making significant changes to their site, content, advertising setup, etc.

There was a heavy focus on Panda 4.2 in the industry as we led into the fall of 2015. And that’s when the algo Richter scale in my office started to jump again. Strap yourselves in, the fall of 2015 was a bumpy ride.

September 2 and 16 Updates
In early September, I saw significant movement across sites that had been impacted by Panda and Phantom in the past (notice the trend here?) The first date was 9/2/15 and many sites either surged or dropped on that day. Again, these were sites that previously had content quality problems and had dealt with Panda and/or Phantom situations in the past.

And it wasn’t long until the next update hit the scene. Exactly two weeks later on 9/16, I saw another update roll through. More sites that had dealt with content quality problems saw movement (either up or down). I wrote a post detailing my findings after analyzing a number of sites impacted by the 9/2 and 9/16 updates. Based on my analysis, it was clear that “content quality” was the focus.

And We’re Not Done Yet! – November 19, 2015
As I was finalizing this post, it seems that yet another unconfirmed update has been released. There were many claims of movement starting on 11/19/15 from webmasters globally. I am also seeing movement based on the data I have access to, in addition to new companies reaching out to me about the update. So it does look like there was an update pushed last Thursday.

Also, Google’s John Mueller was asked on Twitter if there was an update and he replied with the following response (see below). I’ve heard that type of response quite a bit over the years when there was a core ranking algo update. :) 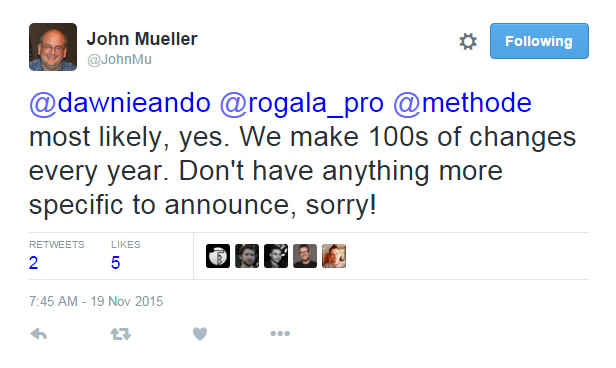 When analyzing the sites seeing movement, many of those sites had been previously impacted by Panda and/or Phantom. Once again, the update looks “content quality” related to me and does not look to be connected to links. That said, we are still early on. If this was another unconfirmed update focused on “content quality”, then it joins the others I mentioned in this post that began rolling out in February, continued with Phantom, then in September, and now a late November update.

{Update: I have now heavily analyzed the November 19, 2015 update and it definitely had a strong connection to Phantom 2 from May 2015. Many sites that were impacted during Phantom 2 in May were also impacted on November 19 during Phantom 3. And a number of companies working to rectify problems saw recovery and partial recovery. You can learn more about Google’s Phantom 3 Update in my post covering a range of findings.}

———————
The rapid release of these updates got me thinking about their connection to Panda and what Google has planned for our cute, black and white friend. I have a theory about this and I’ll cover that next.

Are The Rapid-fire “Quality Updates” The Deconstruction of Panda?
We know that Google intends to bake Panda completely into its core ranking algorithm at some point (and Penguin as well). I mentioned earlier that all of these unconfirmed updates could be Google deconstructing Panda and taking those pieces and baking them into the core ranking algorithm. That could have started with the 2/5 update, continued with Phantom 2 in early May, and then even more with the bi-weekly updates in the fall of 2015, and continued now with the 11/19 update. The summer simply could have been a break from the process as Panda 4.2 rolled out.

Note, that is speculation, but data definitely backs this theory. There were a number of algorithm updates focused on “content quality” and we know Google wants to bake Panda into its real-time algorithm. Hard to say if that’s the case, but it’s important to note.

Dealing With Unconfirmed Quality Updates
As you can guess, this has been extremely frustrating for many business owners dealing with traffic loss from Panda, Phantom, or unconfirmed algorithm updates. Based on helping a number of companies with this situation, I’ve provided a bulleted list below with some recommendations. It is not a comprehensive list of what to do, but can definitely help you get moving in the right direction.

Summary – Know What Hit You, Respond Accordingly
As you can see, 2015 has been a volatile year from an algorithm update standpoint — yet only a few updates were actually confirmed by Google. In this post, I provided additional important updates that could have impacted your Google organic traffic starting back in February and being released throughout the year. I recommend reviewing your 2015 Google organic trending and identifying any swings in traffic around those important dates. Then form a strong plan of attack for fixing any problems from a content quality standpoint.

You have to know what hit you in order to take the appropriate actions. And that’s sometimes hard to do when Google doesn’t confirm specific updates. I hope this post was helpful, at least from that standpoint. Good luck.