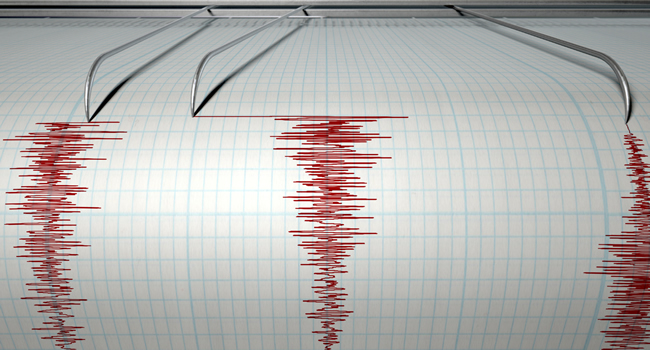 As many of you know, Phantom 2 began rolling out on April 29, 2015, just days after the mobile-friendly update was released. Phantom 2 was a big update that Google initially denied. During my analysis of the update, I saw a lot of movement across sites dealing with content quality problems. It was clear from the beginning that the algorithm update was focused on content quality (like Panda). That’s one of the reasons many people (including myself) initially believed it was a Panda update.

Once Google confirmed the update, they explained that it was a change to its core ranking algorithm with how it assessed “quality”. Even though Google explained that Phantom was part of its core ranking algorithm, I had a feeling that websites would not be able to recover quickly. The reason? I had seen this before, specifically with the original Phantom update in May of 2013. Phantom 2 was eerily similar to Phantom 1 (and rolled out almost 2 years to the day that Phantom 1 rolled out). Interesting timing to say the least.

Both Phantom 1 and 2 Were Panda-Like
With Phantom 1, I also saw the update target content quality problems. The companies I helped with fresh hits had a dangerous recipe of user engagement issues, content quality problems, and technical issues that all led to significant drops in organic search traffic. It took nearly three months before I saw the first Phantom 1 recovery, with others following as time went on.

It took a lot of work to see recovery from Phantom 1… it was not a trivial undertaking. And I expect Phantom 2 remediation and recovery to follow suit.

Actually, we are already over two months out from the Phantom 2 update (late April/early May), and I haven’t seen any major recoveries yet. That being said, I’ve seen a lot of movement on specific dates following Phantom. That includes both additional drops in traffic or sudden jumps for Phantom 2 victims. And that’s the topic of this post – Phantom tremors.

Multiple Phantom Tremors Since 4/29
After Panda 4.0 in May of 2014, I saw what looked like near-weekly updates impacting Panda victims. I called these updates Panda tremors, and they were confirmed by Google’s John Mueller.

Basically, after Google pushes a major update, it can refine and tweak an algorithm and then push smaller updates (to ensure everything is working the way they want). I saw many of those tremors after Panda 4.0. Well, Phantom 2 has been similar. I started seeing Phantom tremors soon after the initial rollout and I have seen several more over time.

And most recently, I saw the latest Phantom tremor starting on 7/14/15. I’ve seen the impact with companies I am helping now, but I’ve also had new companies reach out to me explaining what they are seeing. And when tremors roll out, Phantom victims can see more impact (mostly negative based on my analysis, but there has been some positive movement).

Negative movement makes a lot of sense if the site in question hasn’t made any efforts to improve from a quality standpoint. For example, here is the hourly trending for a site hit by a Phantom tremor on 7/14. Notice the change in trending starting around 11AM ET on 7/14:

And here is a screenshot of a site that saw positive movement starting around that time:

Here is another screenshot of negative impact, this time showing the drop in clicks when comparing traffic after the tremor to the timeframe prior (based on the 6/8 tremor): 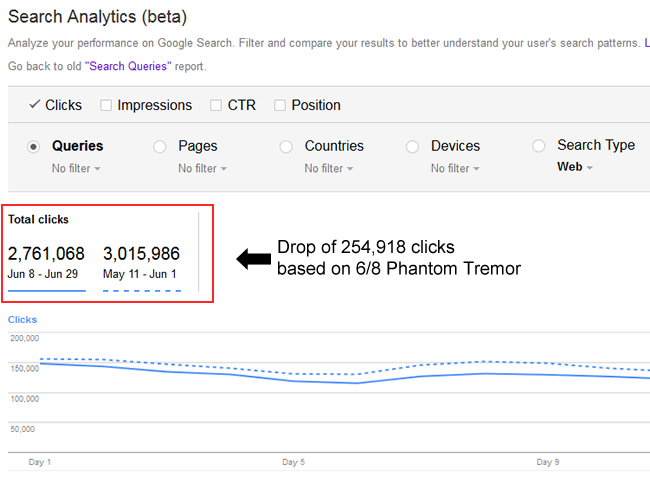 (Update: Here are some more screenshots of impact from the 7/14 Phantom tremor):

This example shows impact during the late June tremor and then more impact on 7/14:

And here is an example of a quick jump at the end of June with that gain being rolled back during the 7/14 update:

Documenting Important Phantom Dates:
In order for Phantom victims to track their own trending based on Phantom tremors, I have included important dates below. It’s always important to understand why drops or spikes occur, so I hope this list of dates provides some clarity:

What This Means for Panda Victims
Remember, many Phantom victims have been impacted previously by Panda. For example, some sites that were still working to recover from Panda got hit by Phantom, while others that already recovered from Panda got hit too. Yes, some of those sites saw drops after fully recovering from Panda.

For those sites still impacted by previous Panda updates that got hit by Phantom 2, it’s clearly not a great sign. We know that Phantom focuses on “quality” and so does Panda. I can’t imagine Phantom reacting negatively to your site, while Panda reacts positively. If that’s the case, then Google has an algo problem.

Now, if a site has recovered from Panda and then saw negative impact from Phantom, then that does not bode well for the next Panda update. Phantom is clearly picking up quality problems, which could also contribute to a future Panda hit. We are eagerly awaiting the next Panda refresh so recent Phantom hits on sites that have recovered from Panda should be concerning.

I wrote a post recently about the SEO nuclear option and how it relates to both Panda and Phantom hits. Let’s face it, with multiple major quality algorithms running like Phantom and Panda, it’s ultra-important for websites to identify and fix all quality problems riddling their sites. If not, then they can see more impact. And in a worst-case scenario, they could get hit by both Phantom and Panda, which is what I call Phantanda. And although Phantanda sounds like a soda or rock band, it’s not cool or fun. You don’t want to experience it.

Is Phantom The Real-time Panda?
In my Phantanda post, I brought up the possibility that Phantom was actually the migration of Panda (or Panda factors) to Google’s real-time algorithm. It’s entirely possible this is the case. I’ve analyzed many sites hit by Phantom 2 and every quality problem I surfaced would have been picked up by a thorough Panda audit. The factors are extremely similar…. almost identical actually.

By the way, after Phantom 2 rolled out on 4/29, Josh Bachynski tweeted a similar thought. I said at the time that he was on to something… and I still believe that.

And with Google having all sorts of problems with Panda, this makes even more sense. For all we know, Panda might have problems with Phantom (as Phantom is part of Google’s core ranking algorithm and also focuses on quality). If that’s the case, then the “technical problems” Google has explained could be Panda and Phantom at odds with one another.

That’s total speculation, but there are now two quality cowboys in town. And to me, this SEO town might be too small for the both of them. It wouldn’t surprise me to find out that Panda is slowly being incorporated into Google’s core ranking algorithm. Remember, it’s been almost nine months since the last Panda update (10/24/14), while we’ve had multiple Phantom updates (the initial rollout and then several tremors). Hopefully we’ll find out soon what’s going on with Panda, and its relationship with Phantom.

Moving Forward: Keep Implementing (The Right) Changes
To quickly recap this post, if you were impacted by Phantom 2 in late April or early May, then you very well could have seen further impact during one or more Phantom tremors. I would check the dates I listed above and see if your site saw any drops or spikes during that timeframe.

And more importantly, continue to make the right changes to your website. Audit your site through a quality lens, identify all problems riddling your site, and move quickly to rectify those problems. That’s how you can rid your site of both bamboo and ectoplasm. Good luck.