Panda can be devastating. We all know that’s the case and it’s been documented to the nth degree since February of 2011. And now we have Phantom (AKA “The Quality Update”), which was a change to Google’s core ranking algorithm regarding how it assesses “quality”. Between the two, you can clearly see that Google is heavily focused on increasing the quality of the search results.

For webmasters, it’s bad enough when you see a big drop in rankings and traffic from Panda alone. Some sites can drop by 60%+ when Panda rolls through. But for many sites riddled with bamboo, little did they know that Panda has a close friend named Phantom who has no problem kicking a site while it’s down.

Since the end of April, I saw a number of sites that were already impacted by Panda see more negative impact from Phantom. And then there were some sites that recovered from Panda previously, only to get hit to some degree by Phantom. And as you can guess from the title of this post, I call these double-hits Phantanda.

In this post, I’ll explain more about Phantanda, how it relates to Panda, I’ll introduce the SEO nuclear option, explain why it’s important, and then I’ll end by providing some recommendations for those that want to go nuclear.

Opportunities for Recovery and Frequency of Quality Updates
As mentioned above, Google now has a one-two quality punch which I’m calling Phantanda. It’s not a soft drink or a rock band, but instead, a devastating mix of algorithms that can wreak havoc on a website’s organic search traffic.

If you’ve been hit by Phantanda, then it’s incredibly important to heavily audit your site through a quality lens. That audit should produce a thorough remediation plan for tackling any problems that were surfaced during the audit. Then you need to move quickly to execute those changes (flawlessly). And then you need Google to recrawl all of those changes and remeasure engagement. Yes, this is not a trivial process by any means…

An example of a Phantom hit on a site that has struggled with Panda:

In the past, Google used to roll out Panda monthly. That was great, since there were many opportunities for sites to recover as they made changes, removed bamboo, improved the user experience on their websites, and published higher quality content. But as many of you know, Panda hasn’t rolled out since 10/24/14. That’s a horrible situation for many battling the mighty Panda.

Sure, Gary Illyes said the next Panda update is coming soon (within weeks), but it has still been way too long between Panda updates. And that’s especially the case when we saw weekly Panda tremors after Panda 4.0.

The fact is we need more Panda updates and not less (as crazy as that sounds). Hopefully the next Panda update is right around the corner. We’ll see.

Ectoplasm vs. Bamboo
From a Phantom standpoint, Google implemented changes to its core ranking algorithm with how it assessed “quality”. It was very similar to the first Phantom update, which was in May of 2013. Phantom 2 was eerily similar to Phantom 1 and I’ve done a boatload of research and work with both updates.

The good news is that websites were able to recover from Phantom 1. The bad news is that it took months of remediation work (similar to Panda remediation). I believe the first recovery I saw took approximately three months, while others took longer.

Based on my analysis of Phantom 2 (and my work helping companies that have been impacted), I believe the remediation and recovery process is similar to Phantom 1 (longer-term). And that make sense. The Quality Update (Phantom 2) rolled out on 4/29, so websites need enough time to audit, strategize, execute, and wait for Google to process those changes. Remember, Google needs to crawl and measure the changes. It’s not like going mobile-friendly, which is a binary test for now (yes or no). In my opinion, it’s much more complicated than that.

In my opinion, Phantom remediation is very Panda-like. Take a long-term approach, truly understand the various quality problems riddling a website, and then take aggressive action to rectify those problems. And that leads me to the core point of this post – the nuclear option.

The SEO Nuclear Option – It’s No Walk in the Park, But It’s Worth It
I started referring to the nuclear option in June of 2013 when Google first started talking about Panda going real-time. I explained that if that was the case, then webmasters would have no idea what hit them. And that would make it harder to understand what caused the negative impact and how to fix the problem(s).

And as other algorithms crossed Panda in the wild, I brought up the nuclear option again. For example, when Google rolled out Panda during an extended Penguin rollout. Yes, they did that… To pull a quote from Jurassic Park, “Clever girl…” :) 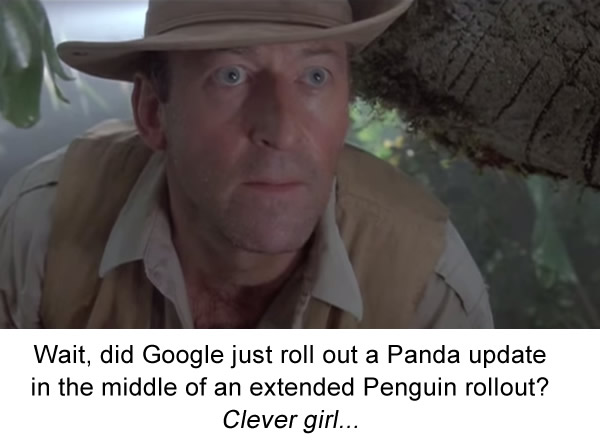 And now we have Phantom throwing its hat in the ring. As mentioned earlier, many of the problems I surfaced with Phantom victims were extremely similar to Panda problems. For example, I would have surfaced the same problems when completing a thorough audit (whether a site was impacted by Panda or Phantom). Heck, for all we know Phantom is actually the beginning of Panda being incorporated into Google’s core ranking algorithm. It’s entirely possible.

And of course we still have Penguin, with a release schedule less frequent than Halley’s comet passing earth. So based on what I just explained, what can a webmaster do when all of these algorithms are running around the web? Enter the nuclear option.

What Is The SEO Nuclear Option?
Simply put, the nuclear option involves identifying all SEO problems for a particular website and forming a plan for executing all of the changes over a period of time. That includes both on-site problems (like content quality, user engagement, advertising issues, mobile-friendliness, etc.) and off-site problems (like unnatural links, syndication issues, etc.) 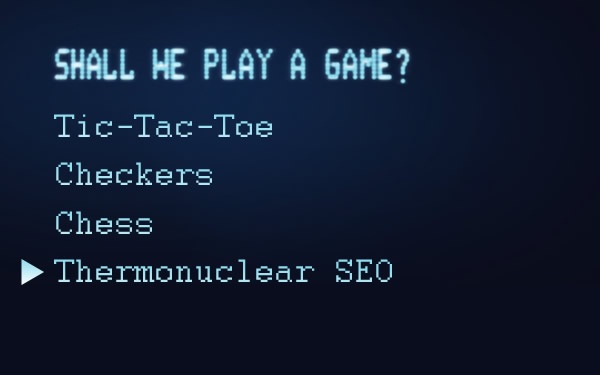 Yes, it’s a lot of work, but again, it’s completely worth it in the long-term (in my opinion). The companies I’ve helped that decided to go down the nuclear path simply couldn’t take it anymore… They were tired of chasing algorithms, tinkering with urls, tweaking this, and then that, only to find themselves hit again by another algorithm update. The grey area of Panda or Phantom is enough to drive a webmaster insane.

Recommendations for Going Nuclear:
As you can imagine, pushing the giant red button is a big undertaking that should not be taken lightly. So based on my experience helping companies with the nuclear option, I’ve provided some recommendations below. My hope is that if you choose to go nuclear, you can follow these tips to ensure you maximize your efforts (and avoid launching duds).

Summary – It’s OK To Push The Giant Red Button
With multiple quality algorithms crossing streams, it has never been more important to consider the SEO nuclear option. Pushing the giant red button can be a tough decision, but it can also rid your site of nasty quality problems that attract Pandas and Phantoms. And if there’s something worse than having bamboo on your site, it’s adding ectoplasm to the mix. Sure, choosing the SEO nuclear option is a bold move, but that might be exactly what you need to do.