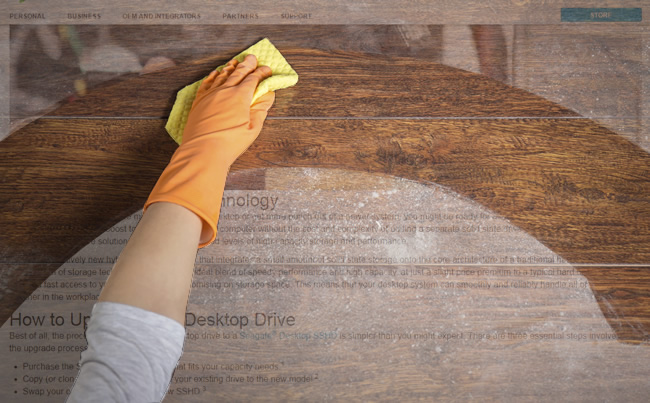 You’ve heard it before a thousand times. “Produce killer content to win at SEO.” And I definitely agree with that statement. Because if you do, then you can get in front of more eyeballs, gain a following, naturally build powerful inbound links, and there’s a good chance that Google will reward you with strong rankings over time. And with strong rankings and targeted traffic, conversions and revenue can jump (whether that’s sales, sign-ups, memberships, ad revenue, etc.)

Now, although killer content can help drive strong SEO, and you might even be executing at a high level right now, there’s a hidden danger that publishers need to be aware of. And it can slowly creep its way into becoming a big problem. So if you are executing a content marketing strategy, and you think you’re killing it, then definitely read the rest of my post. It could end up saving you some grief.

The Natural Evolution For Some Content – It Becomes Outdated
Let’s say you’ve been producing high quality content that helps people thoroughly learn how to do something (i.e. how-to content). You meticulously planned each post, you are extremely knowledgeable in your niche, and you continually produce killer content that helps users. That’s all good, but I’ve found too many people hit publish and never revisit that killer content again. They move on, thinking that Google will forever love them for producing such amazing content.

But what if those articles start to get dusty over time? What if some fundamental changes occur to the subject matter you covered? What if product names change, visuals change, resources you are linking to change, and steps change in the tutorial you mapped out for users?

If that’s the case, then how “killer” is that content over time? For example, is it up-to-date? Do the step-by-step instructions still apply? Are the screenshots current? So on and so forth. 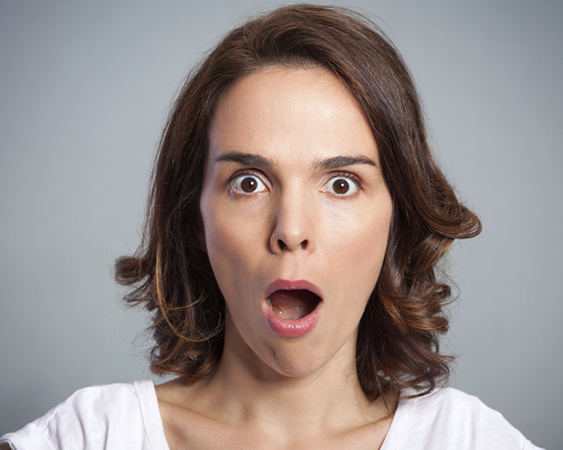 And that’s exactly my point. It’s very easy to produce a high-quality article or tutorial, build amazing Google traffic, but then never revisit the post (thinking Google will ALWAYS love that piece of content). And if you don’t revisit the post over time, and it becomes outdated, bad things can happen Google-wise. I have a quick case study that I’ll document in this post that explains that very situation. It’s a happy, sad, happy story that can apply to many publishers living in Google Land. Let’s dig in.

The Problem – Clear As Day
I was digging through data for a client when I noticed a dip in Google organic traffic. It wasn’t horrible, but there was definitely a dip.

I isolated the drop from a query and landing page perspective and the problem was as clear as day. It was one of my client’s best-performing posts, and it dropped in traffic for a number of popular queries. Actually, it seemed to drop for broader terms related to the subject matter (head terms), while still ranking for some very specific keywords (longer-tail terms). I found that interesting and I dug in further.

When reviewing many of the queries leading to this killer how-to post, it was clear the article wasn’t as killer as it was before… Remember what I explained earlier about posts becoming outdated? Well, everything from the title to the screenshots to the references were now out-of-date (or partially out-of-date).

Here are some of the core elements that needed to be updated: 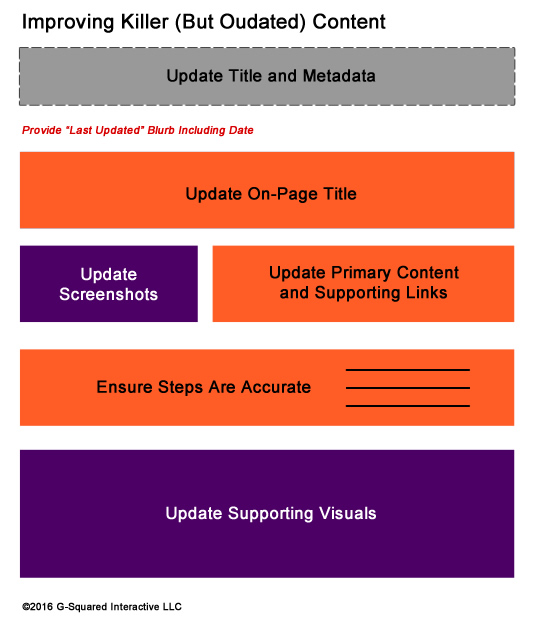 When a post doesn’t meet user expectations anymore, user unhappiness increases. And when users are unhappy, it’s not long before Google is unhappy. In addition, if the older post doesn’t contain the updated subject matter, and related copy, then the post can’t possibly rank for queries related to that new content. So between user unhappiness and outdated content, it’s not long before Google can pick up on the problem. And when that happens, rankings drop and traffic takes a dive. That’s exactly what happened here.

Head Terms Drop, Longer-Tail Queries Remain
As I explained earlier, the post still ranked for longer-tail queries directly related to the older subject matter, but not the broader head terms. To clarify, the post still ranked for queries that referenced the out-of-date content (which some people were still searching for), but dropped for users searching for the subject matter in general. And the post definitely didn’t rank for queries that referenced the most recent information about the subject (since the older post didn’t even contain that content at all!) 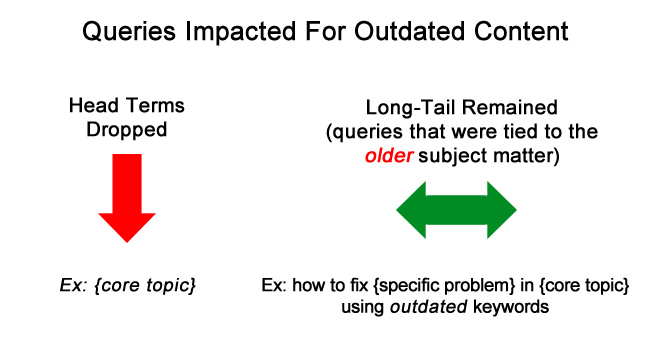 Taking Data To The Client
Unfortunately, it’s easier than you think to let this happen… The site has many in-depth articles and how-to posts. All of them are high quality. This just happened to be a case of a post that desperately needed an update. So I presented the findings to my client, the dip in traffic, the signs of user unhappiness, and the gap between queries and content. Everyone agreed that this should be fixed, and quickly.

After reviewing the situation, my client realized it wouldn’t take long to update the post. Then once it was updated, we just needed to see how Google would respond (and how quickly). We got to work.

The Fix – Less Than One Day Of Work
Yep, less than one day of work was needed to fix the post. The original author updated the title, the post details, the steps involved, links to supporting articles, and the screenshots. In addition, the article now included a quick blurb about the update (making sure both users and Google knew the date of the update and why the update was needed).

Then I used fetch as google and submitted the post to the index. It took two days for the update to be indexed, which is common when you fetch and submit an article that’s already published. I wish Google would quicken up the process there, but hey, at least you can resubmit. 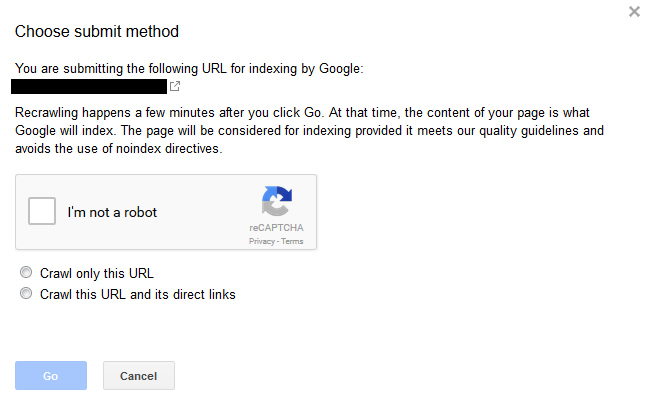 Then it was time to analyze changes in rankings and traffic based on the update. And let me tell you, we were pleasantly surprised with the changes (and how quickly that happened).

The Results – Wow
Quickly after the post had been indexed, rankings began to jump across a number of relevant queries (and queries that had dropped). Now that the post was accurate, the title was accurate, the steps and screenshots were accurate, almost all of the original rankings returned (for head terms related to the subject matter).

It was almost like Google was trying to speak to us through the drop in rankings. Sure, I’d rather have a signal in Google Search Console (GSC) that says, “hey, this post looks outdated”, but I’m not complaining if rankings can return quickly! :)

A sample of queries that rebounded:

Traffic to the post jumped with the increase in rankings and my client was humming along again. Now, it’s important to understand that this is a trusted site in Google’s eyes, so I’m not saying every site can see this type of behavior. But, it’s an important case study since many sites have content that ages naturally over time, and requires an update every now and then.

Remember, users are reading your content with the hope of learning how to do something, how to fix something, etc. If you provide the wrong information, or information that’s out-of-date, then they will not be happy. And Google can pick up on that. It clearly did here and rankings dropped… And then you have users searching for the most recent content related to the subject matter, which outdated posts don’t even contain! It’s a double whammy from an SEO perspective.

But, it was awesome to see how quickly rankings returned for the post once the content was updated. And it took less than one day to update.

What You Can (And Should) Do Now
You need to fully understand your top content. Understand what users are searching for and make sure you are meeting and/or exceeding user expectations. If that sounds familiar, then you’ve been paying attention algorithm-wise. That’s exactly how Gary Illyes explained Panda recently. I mentioned this in my post about the March algorithm updates, and I’ll mention it again here.

Gary explained that Panda is not about penalizing a site. It’s simply trying to match users with the right content based on their query. When sites become overly prominent for queries they can’t answer, then Panda needs to “adjust those sites” that aren’t meeting expectations. It’s one of the reasons I believe that the March algo updates were Panda. I saw a lot of that during my analysis of the initial update on 3/3 and the subsequent tremors on 3/14, 3/21, 3/26, etc.

Back to outdated content. If you want to track down queries by url in GSC, then you can follow my Search Engine Land column that explains how to do that. By doing so, you can uncover the queries leading to each of your top posts. Then you should objectively read the content and make sure you are meeting and/or exceeding expectations. There are times you might still be doing a great job with older content, but there might be times when you cringe as you read through an older post and see how outdated it is now. But you won’t know until you dig in. 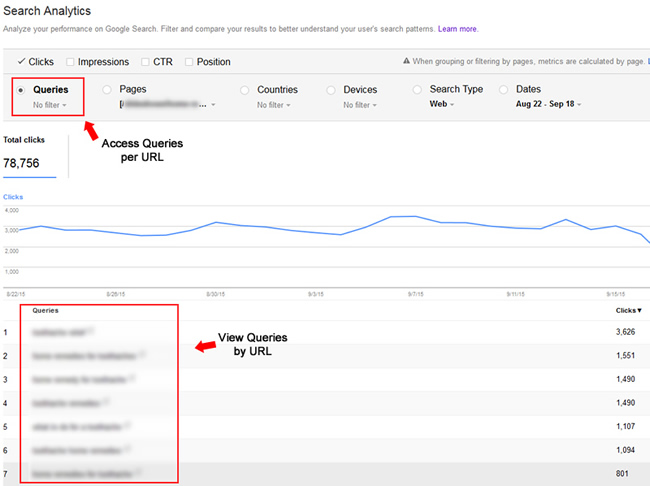 Summary – Brush The Dust Off Your Killer (But Older) Posts
Based on the case study I documented above, it’s clear that updating aging killer content is critically important. Unfortunately, it’s easy to let older posts collect dust over time, which can lead to user unhappiness and content that doesn’t cover the latest subject matter. When that happens, Google can easily pick up on it. And when it does, rankings can drop, and traffic will follow suit.

You can avoid this situation by following the recommendations I provided above. Analyze your posts now before rankings take a dip. That’s one way you can stay afloat in an ever-changing Google world. Now get ready to dust off those older posts. They might just need it.