On Christmas Day, Rap Genius was given a heck of a gift from Google.  A penalty that sent their rankings plummeting faster than an anvil off the Eiffel tower.  The loss in traffic has been documented heavily as many keywords dropped from page one to page five and beyond.  And many of those keywords used to rank in positions #1 through #3 (or prime real estate SEO-wise).  Once the penalty was in place, what followed was a huge decrease in visits from Google organic, since most people don’t even venture to page two and beyond.  It’s like Siberia for SEO.

Gaming Links
So what happened that Google had to tear itself away from eggnog and a warm fire to penalize a lyrics website on Christmas Day?  Rap Genius was gaming links, and badly.  No, not just badly, but with such disregard for the consequences that they were almost daring Google to take action.  And that’s until Matt Cutts learned of the matter and took swift action on Rap Genius.

That was Christmas Day. Ho, ho, ho.  You get coal in your lyrical stocking.   I won’t go nuts here explaining the ins and outs of what they were doing.  That’s been documented heavily across the web.  In a nutshell, they were exchanging tweets for links.  If bloggers added a list of rich anchor text links to their posts, then Rap Genius would tweet links to their content.  The bloggers get a boatload of traffic and Rap Genius got links (and a lot of them using rich anchor text like {artist} + {song} + lyrics).  Here’s a quick screenshot of one page breaking the rules: 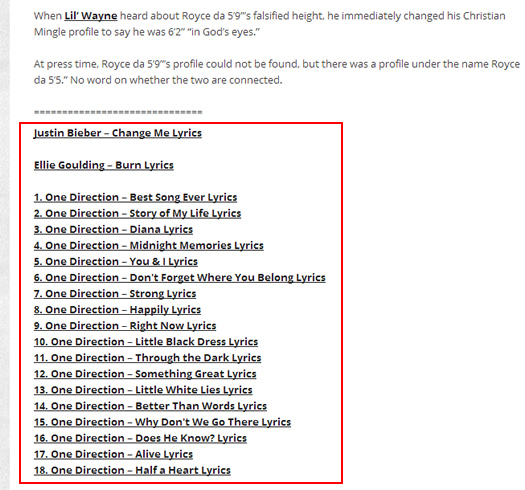 A 10 Day Penalty – LOL
Now, I help a lot of companies with algorithmic hits and manual actions.  Many of the companies contacting me for help broke the rules and are seeking help in identifying and then rectifying their SEO problems.  Depending on the situation, recovery can take months of hard work (or longer).  From an unnatural links standpoint, you need to analyze the site’s link profile, flag unnatural links, remove as many as you can manually, and then disavow the rest.  If you only have 500 links leading to your site, this can happen relatively quickly.  If you have 5 million, it can be a much larger and nastier project.

Rap Genius has 1.5 million links showing in Majestic’s Fresh Index.  And as you start to drill into the anchor text leading to the site, there are many questionable links.  You can reference their own post about the recovery to see examples of what I’m referring to.  Needless to say, they had a lot of work to do in order to recover.

So, you would think that it would take some time to track down, remove, and then disavow the unnatural links that caused them so much grief.  And then they would need to craft a serious reconsideration request documenting how they broke the rules, how they fixed the problem, and of course, offer a sincere apology for what they did (with a guarantee they will never do it again).   Then Google would need to go through the recon request, check all of the removals and hard work, and then decide whether the manual action should be lifted, or if Rap Genius had more work to do.  This should take at least a few weeks, right?  Wrong.  How about 10 days.

Only 10 days after receiving a manual action, Rap Genius is back in Google.  As you can guess, the SEO community was not exactly thrilled with the news.  Screams of special treatment rang through the twitterverse, as Rap Genius explained that Google helped them to some degree understand how to best tackle the situation, or what to target.  Believe me, that’s rare.  Really rare…

Process for Removing and Disavowing Links
Rap Genius wrote a post about the recovery on January 4th, which included the detailed process for identifying and then dealing with unnatural links.  They had thousands of links to deal with, beginning with a master list of 178K.  From that master list, they started to drill into specific domains to identify unnatural links.   Once they did, Rap Genius removed what they could and disavowed the rest using Google’s Disavow Tool.   Following their work, Google removed the manual action on January 4th and Rap Genius was back in Google.

But many SEOs wondered how much they came back, especially since Rap Genius had to nuke thousands of links.  And many of those links were to deeper pages with rich anchor text.  Well, I’ve been tracking the situation from the start, checking which keywords dropped during the penalty, and now tracking which ones returned to high rankings after the penalty was lifted.  I’ll quickly explain the process I used for tracking rankings and then provide my findings.

My Process for Analyzing Rankings (With Some Nuances)
When the penalty was first applied to Rap Genius, I quickly checked SEMRush to view the organic search trending and to identify keywords that were “lost” and ones that “declined”.  Rap Genius ranks for hundreds of thousands of keywords according to SEMRush and its organic search reporting identified a 70K+ keyword loss based on the penalty.

Note, you can’t compare third party tools to a website’s own analytics reporting, and SEMRush won’t cover every keyword leading to the site.  But, for larger sites with a lot of volume, SEMRush is a fantastic tool viewing the gains and losses for a specific domain.  I’ve found it to be extremely thorough and accurate.

Checking the lost and declined keywords that SEMRush was reporting lined up with manual checks.  Those keywords definitely took a plunge, with Rap Genius appearing on page five or beyond.  And as I mentioned earlier, that’s basically Siberia for organic search.

When the penalty was lifted, I used the same process for checking keywords, but this time I checked the “new” and “improved” categories.  The reporting has shown 43K+ keywords showing in the “new” category, which means those keywords did not rank the last time SEMRush checked that query.

I also used Advanced Web Ranking to check 500 of the top keywords that were ranking prior to the penalty (and that dropped after the manual action was applied).  The keywords I checked were all ranking in the top ten prior to the penalty.  Once the penalty was lifted, I ran the rankings for those keywords.  I wanted to see how much of an improvement there was for the top 500 keywords.

Then I dug into the data based on both SEMRush and Advanced Web Ranking to see what I could find.  I have provided my findings below.   And yes, this is a fluid situation, so rankings could change.  But we have at least a few days of data now.  Without further ado, here’s what I found.

Branded Keywords
This was easy. Branded keywords that were obliterated during the penalty returned quickly with strong rankings.  This was completely expected.  For example, if you search for rap genius, rapgenius, or any variation, the site now ranks at the top of the search results.  And the domain name ranks with sitelinks. No surprises here. 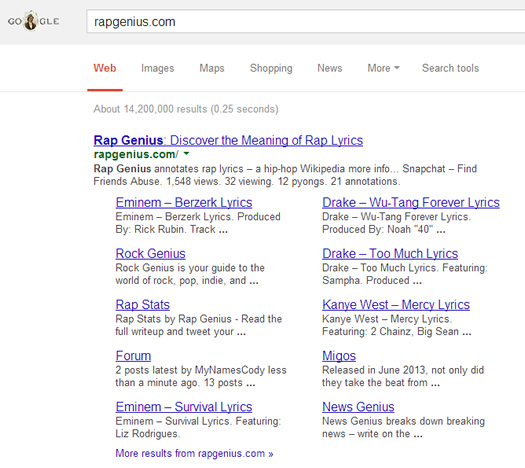 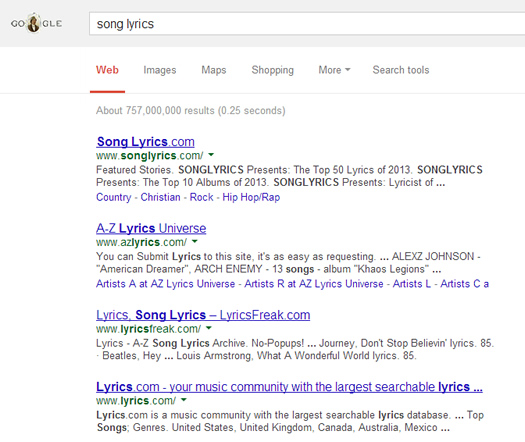 Artist Keywords
I noticed that the site ranked for a lot of artists prior to the penalty (just the artist name with no modifiers).  For example, “kirko bangz”, “lil b”, etc.  Similar to what I saw with category keywords, I saw mixed results with artists.  Searching for the two artists I listed above does not yield high rankings anymore, when they both ranked on page one prior to the penalty.  Some increased in rankings, but not to page one.  For example, “2 chainz” ranks #12 after the penalty was lifted.  But it was MIA when the penalty was in effect.  Another example is “Kendrick Lamar”, which Rap Genius ranked #8 for prior to the penalty.  The site is not ranking well at all for that query now.  So again, it seems that Rap Genius recovered for some artist queries, but not all. 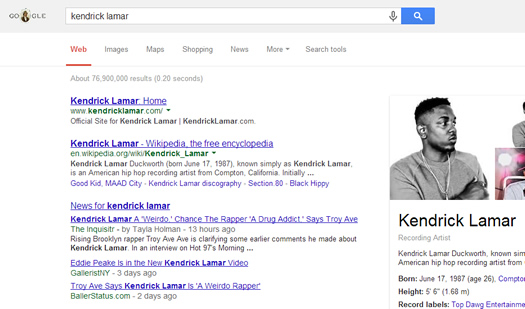 Lyrics Keywords
Based on my research, I could clearly see the power of {song} + lyrics queries for Rap Genius.  It’s a driving force for the site.  And Rap Genius is now ranking again for many of those queries.  When the penalty was first lifted, I started checking a number of those queries and saw Rap Genius back on page one, and sometimes #1.  But when I started checking in scale, you could definitely see that not all keywords returned to high rankings. 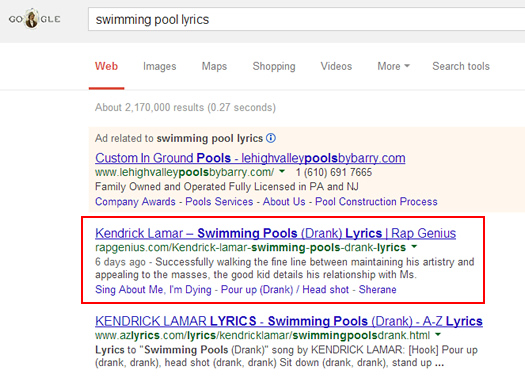 For example, “hallelujah lyrics”, “little things lyrics”, and “roller coaster lyrics” are still off of page one.  Then there are keywords that skyrocketed back up the charts, I mean search rankings.  For example, “swimming pool lyrics”, “marvins room lyrics”, and “not afraid lyrics” all returned after the penalty after being buried.  So, it seems that many song lyrics keywords returned, but there are some that rank page two and beyond. 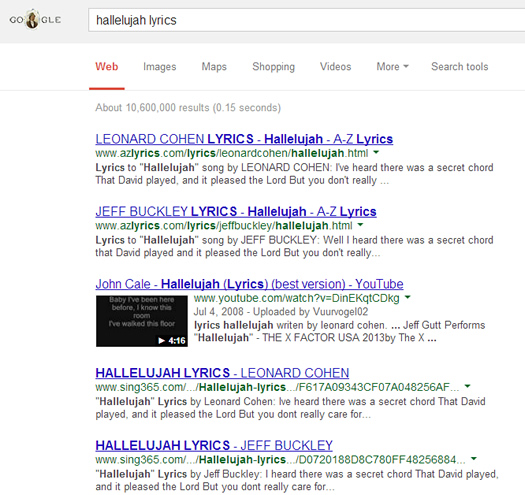 What About Keywords That Were Gamed?
I’m sure some of you are wondering how Rap Genius fared for keywords that were gamed via unnatural links.  For example, “22 two’s lyrics” yields extremely strong rankings for Rap Genius, when it was one of the songs gamed via the link scheme.  Actually, rap genius ranks twice in the top 5.  Go figure. 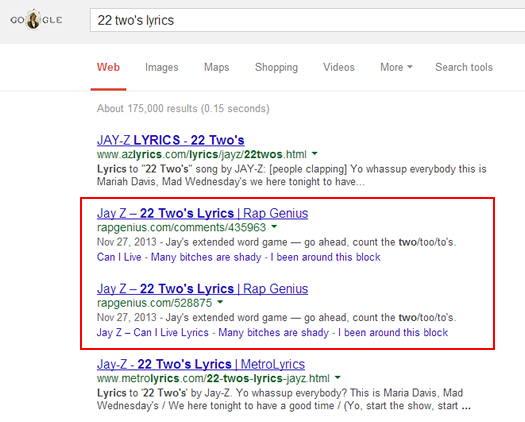 Ditto for “timbaland know bout me”, which was also one of the songs that made its way into the spammy list of links at the end of articles and posts.  Rap Genius ranks #3 right now. 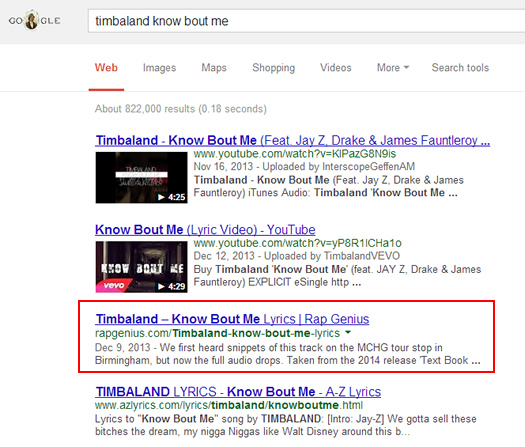 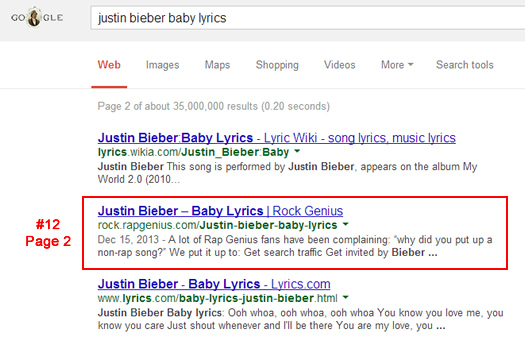 Overall, I saw close to 100 Justin Bieber keywords pop back into the top few pages of Google after the penalty was lifted.  But, many were not on page one anymore… I saw many of those keywords yield rankings on page two or beyond for Rap Genius.  See the screenshot below: 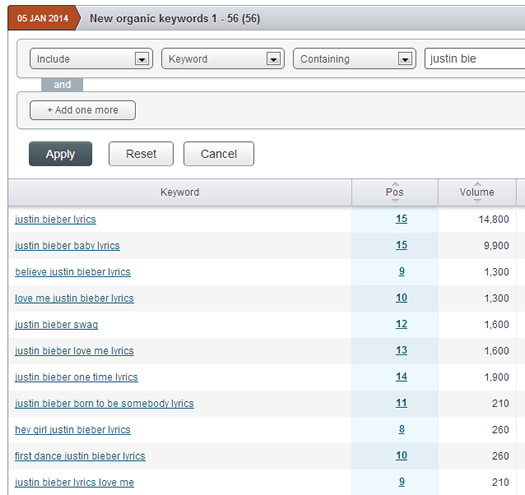 Summary – Rap Genius Recovers, But The Scars Remain
So there you have it.  A rundown of where Rap Genius is after the penalty was lifted.  Again, I can’t see every keyword that was lost or gained during the Christmas Day fiasco, but I could see enough of the data.  It seems that Rap Genius came back strong, but not full-blast.  I saw many keywords return, but still a number that remain buried in Google.

But let’s face it, a 10 day penalty is a slap on the wrist for Rap Genius.  They now have a clean(er) platform back, and can build up on that platform.  That’s a lot better than struggling for months (or longer) with horrible rankings.  As I explained earlier, too many business owners aren’t as lucky as Rap Genius.  10 days and help from Google can quicken up the recovery process.  That’s for sure.

I’ll end with one more screenshot to reinforce the fact that Rap Genius is back.  And it’s a fitting query. :) 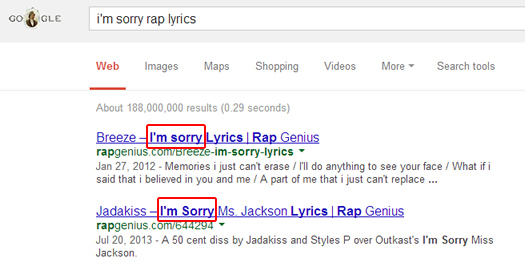