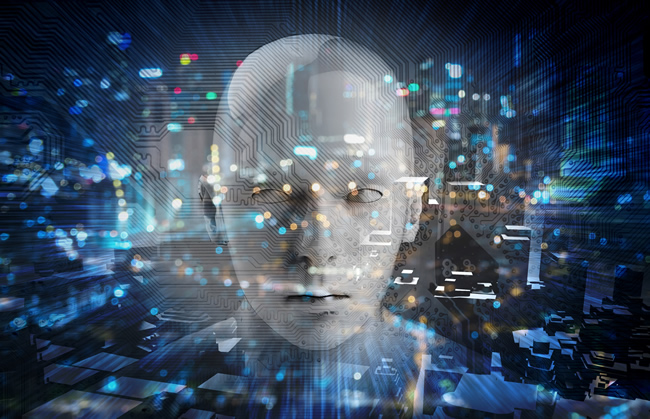 Ever since featured snippets landed in the SERPs, I’ve been heavily analyzing their impact. They have always fascinated me based on their unique SERP treatment, the amount of traffic they can drive, and how the featured snippets algorithm works. And If you’ve read any of my posts about featured snippets, then you know the algorithm is extremely temperamental. It always seems to be looking for the best answer, and can change on a dime.

April 2017 – A Big Change To Featured Snippets
In April, we picked up a pretty big change in how featured snippets were working. There seemed to be a major uptick in the number of featured snippets that were displaying third party images. Typically, a featured snippet that contains an image would display that image from the same page or site being surfaced. For example, like this: 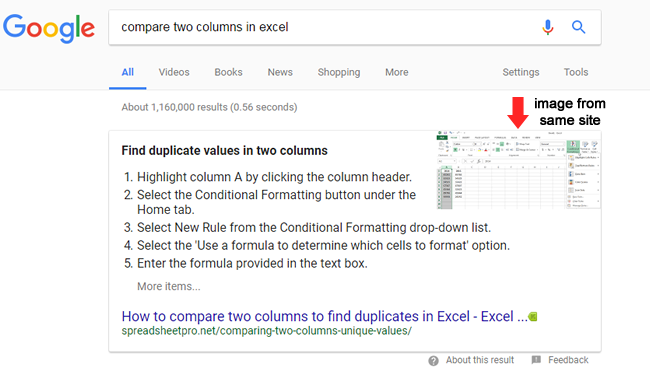 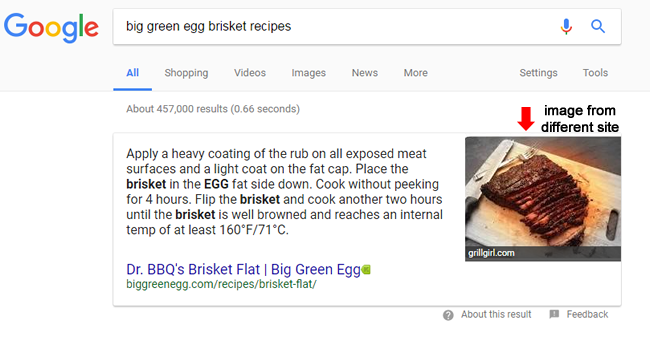 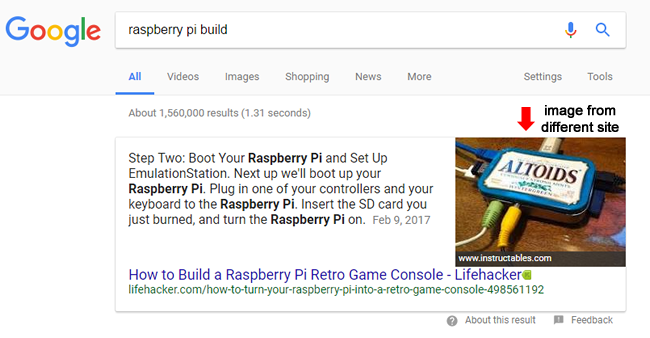 Algorithms Are Not Perfect
Although this seemed to happen in a limited fashion before April of 2017, there was a distinct uptick with the April update. With the change, it seems Google is trying to surface the best image for a featured snippet, no matter where that image comes from. And that can lead to some embarrassing situations. Remember, algorithms aren’t perfect.

For example, check out these images for larger-brand featured snippets, which were surfaced from third party sites: 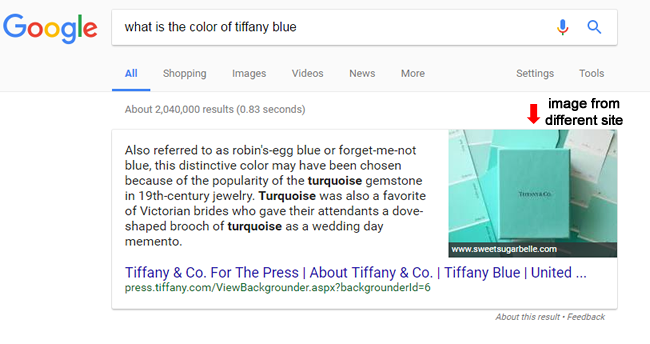 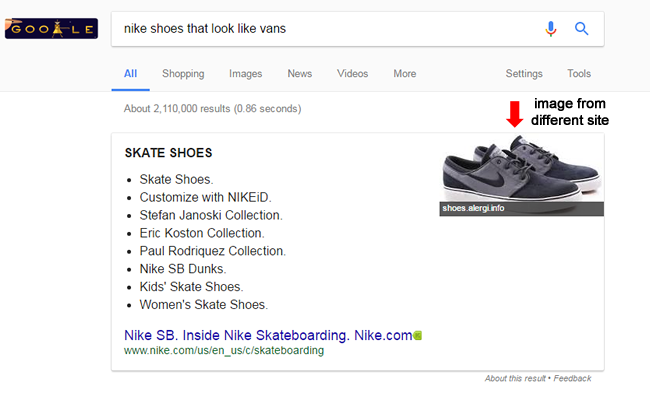 Based on what I was seeing during my analysis, I started wondering if the images being sourced from third party sites could be manipulated by those third parties. For example, if your image was being sourced for someone else’s featured snippet, could you edit that image to say, and show, whatever you wanted? And then have that displayed in the other site’s featured snippet? That would be crazy, but seemed totally possible to me.

I wanted to test it out, but I needed to be able to control the image being surfaced in a featured snippet for another site. I waited for an opportunity, and then the SEO gods gave me a gift (sort of).

The Situation – How Dare You Google?
For a pretty long time I’ve had the featured snippet for “how to demote sitelinks”. I published a tutorial in 2014 that walked site owners through the somewhat confusing process of demoting sitelinks in Google Search Console. The post became pretty popular and ended up with the featured snippet.

Here was my featured snippet: 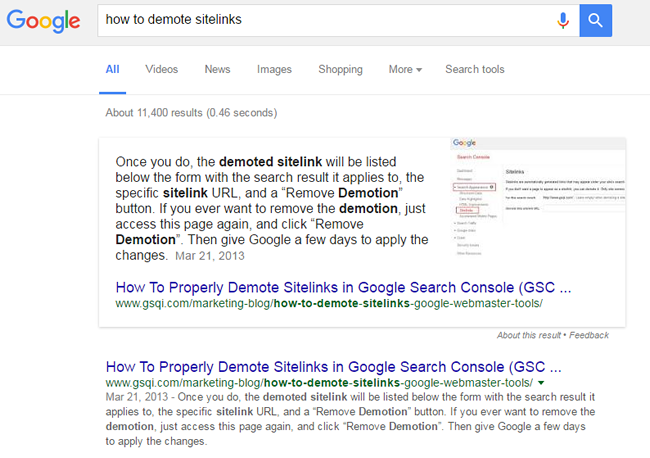 But I seemed to maintain the featured snippet for a while. That’s until recently when Google swapped out my blog post for another covering a similar process. Yes, my beautiful featured snippet had gone away. So sad. :)

BUT WAIT… was I really gone??

Here was the new featured snippet, but with an image sourced from my blog post! 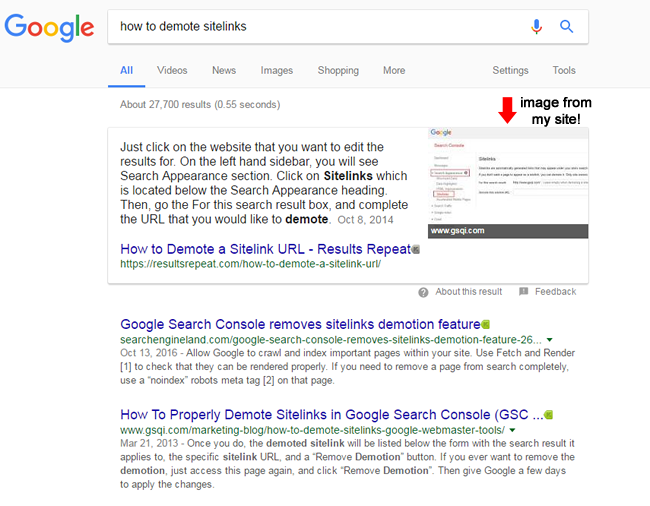 But remember that test I wanted to run? Not all is lost… I could now run my test since one of my images was being used in a featured snippet for another site. I moved quickly to launch my test.

Setting Up The Test – “Hey, I’m down here!”
I fired up Photoshop and opened the image being sourced for the featured snippet from my blog post. It was a good image to test this on, since there was a decent amount of white space. I simply added text notifying users that they could read MY POST which was located down the SERP (and that it was from gsqi.com). Hey, it’s my image and I can do what I want!

Here is what the image looked like after editing. Subtle, right? :) 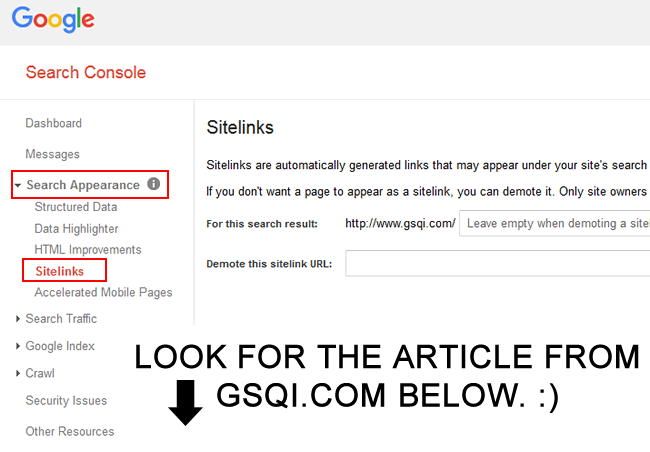 Then I used fetch as Google to request that my post get indexed quickly. Then I waited. I didn’t have to wait long for Google to index the post and my new image. That happened pretty quickly. It was only about an hour before I saw the new image indexed.

Here you can see that new image was indexed in Google images, but the featured snippet still used the old image!

“Clever girl…” The Featured Snippet Changed But…
The next morning I checked the snippet to see if the image would reveal my subtle message. Low and behold, the featured snippet image changed… but not exactly the way I thought it would! The featured snippet algorithm seemed to detect manipulation and swapped out that image for another one, BUT STILL FROM MY POST.

Wow, I was extremely impressed with the sophistication of the algo. All of this happened really quickly… And the algo seemed to understand that the image changed and that it was now being manipulated. So it changed the image to another one from my post. Very clever Google. I’m impressed.

After detecting manipulation, Google swapped out the edited image for another from my blog post! 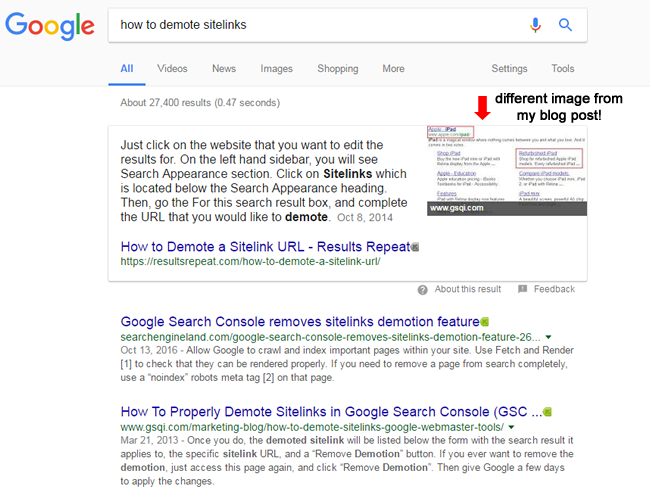 Key Takeaway #2
The featured snippet algorithm is smart enough to detect manipulation. And when it does, it can easily swap out the edited image for another (even if that new image is from the same site). The algo is making decisions just like a human would, and in near-real time.

Reversing Course – What will the algorithm do?
After seeing the featured snippet algorithm outwit me, I decided to quickly change my image back to the original version without the message. I removed the text explaining to users that they should read my post, re-uploaded that image, and then used fetch as Google again to request indexation. Then I waited.

So what are we dealing with here?? It’s human-like.

After detecting the image was not being manipulated anymore, Google added the image back in the featured snippet: 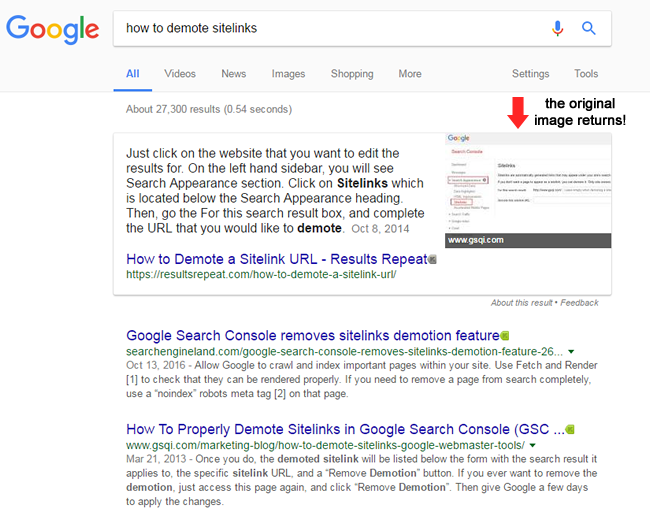 Key Takeaway #3
The featured snippets algorithm was smart to enough to understand that the image was not being manipulated anymore, so it returned that image to the featured snippet right after it was indexed again.

Summary – Google’s Algorithms Keep Getting Smarter
I was blown away to see how Google’s featured snippet algorithm was able to detect manipulation, act quickly to remove an image, and then reverse course when it detected the manipulation had stopped. Remember, we’re talking about an algorithm here!

This shows us that Google’s algorithms keep getting smarter and more human-like. We know featured snippets are using machine learning to surface the best possible snippet for the SERP, and now we know that process might be used for images as well.

If your images are being used for featured snippets from other sites, understand that you probably can’t trick Google’s algorithms (for long anyway). If you manipulate the image, it can easily be swapped out. The algorithm is like quasi-human watching the SERPs and ready to take action, when needed. That’s ultra-impressive, but scary at the same time.