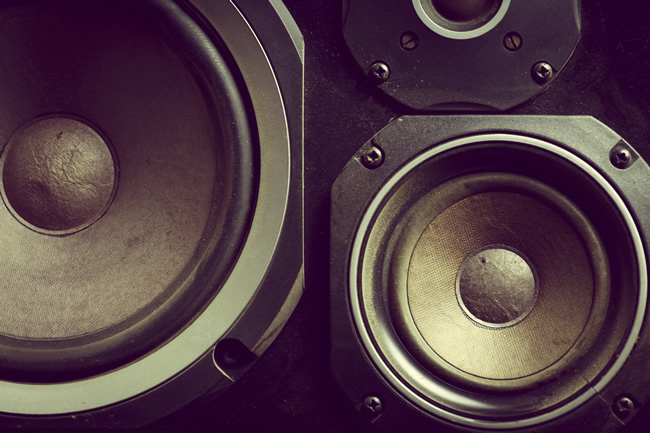 On Tuesday, Google announced a demo of accelerated mobile pages (AMP) in the standard search results. That was huge news and should have every website that’s publishing content take notice. Until the demo was announced, amplified pages would only show in very specific areas of the mobile search results, like the “Top stories” section (via a carousel).

But with the demo, Google is showing that any AMP could potentially show up in the standard search results, from any site, and in any country. That would mean AMP could jump out of the carousel and into the main search results. Again, that’s big news.

And for those of us in SEO, it’s easy to get ultra-excited about this. Although there won’t be a direct ranking boost based on having amplified pages (yet), enabling users to quickly launch near-instant pages from the search results, along with the display an AMP icon in the SERPs, is exciting (and we believe this can give us and our clients an advantage).

A Tweet That Got Me Thinking
Right after tweeting out the demo, Ari Roth replied to me asking if I thought the average user even knows what AMP is? And if they understand what the AMP icon is, and that it would mean a better user experience on their phones? 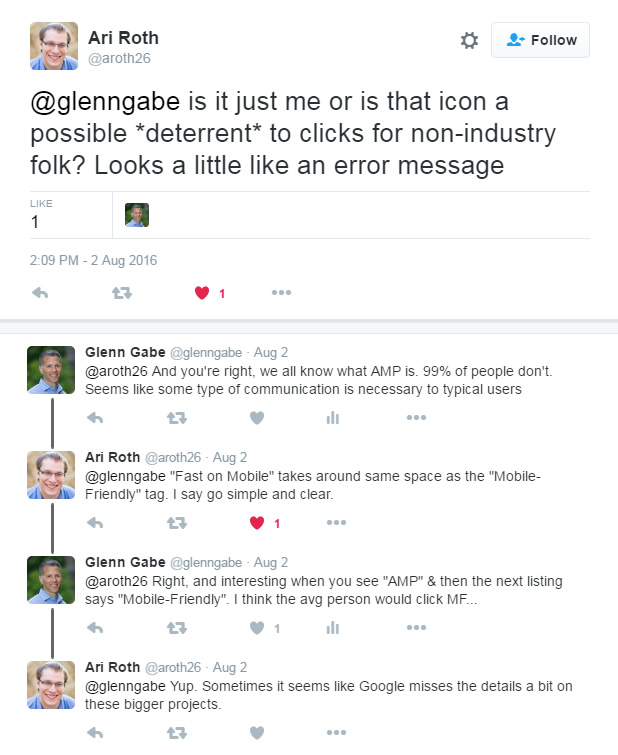 And at that moment, I realized I might have been viewing AMP through an SEO lens only. Sure I know about AMP and its benefits, but what about everyone else in the world outside of the search industry? I replied to Ari saying that was an excellent point.

There’s not much data from publishers yet performance-wise, and again, AMP is only displayed in limited areas right now in the search results. But Barry Schwartz recently provided some stats based on Search Engine Roundtable implementing AMP. He is seeing lower click through rates from AMP, and that got me thinking that maybe the lower CTR is due to an AMP perception problem. I wanted to learn more.

A Quick AMP Poll:
So, I fired up survey monkey and created a really simple two-question poll. I basically wanted to know if people outside of SEO knew what the AMP icon was and what it meant. And then I wanted to know if they would be more apt to click the AMP result or the “mobile-friendly” result.

So I took a quick screenshot of a lyrics search (I’ve helped a number of sites in that niche and Google even said to test out lyrics searches in the demo). Then I created the poll and started emailing friends of mine that were not in the SEO industry.

In the past day or two, 44 people have now taken the poll, and most of the people are between the ages of 25 and 50. But I even received a response from a 9-year-old (yes, 9-year-olds search Google too), as well as a response from a 75-year-old. None of the respondents are involved with SEO. Most of the respondents consisted of professionals from several different industries.

The results were fascinating, and made a lot of sense when you take a step out of the SEO bubble for a minute. Read on.

Important note: I’m not saying that 44 people represent all internet users… It was just a quick poll to people I know outside of SEO. But almost all of their responses were identical. My core point is to simply raise the important question of whether the average Google user has any idea what AMP means, and if that would get them to click the AMP listing versus another that says “mobile-friendly”. Also, I understand that using a lyrics search result with AMP listings could have some people thinking there’s a music connection. That just happened to be the screenshot I pulled. That said, it doesn’t take away from the point that users might not understand what AMP is. In other words, if someone thought it was connected to music, then they don’t understand what AMP is overall.

And I encourage you to ask people you know outside of SEO the same questions! You might see different results than I did. Or, you might see the same results. It’s important to understand user perception before taking the AMP plunge. And I think it’s important for the future labeling of AMP in the Google search results. In other words, should it be labeled AMP, or maybe something more descriptive? More on that later.

The AMP Poll Results
The first question was a simple, open-ended one. I provided an image of a mobile SERP with both AMP results and mobile-friendly results. Then I asked, “Do you know what AMP means in the image below?” Here is the image I displayed: 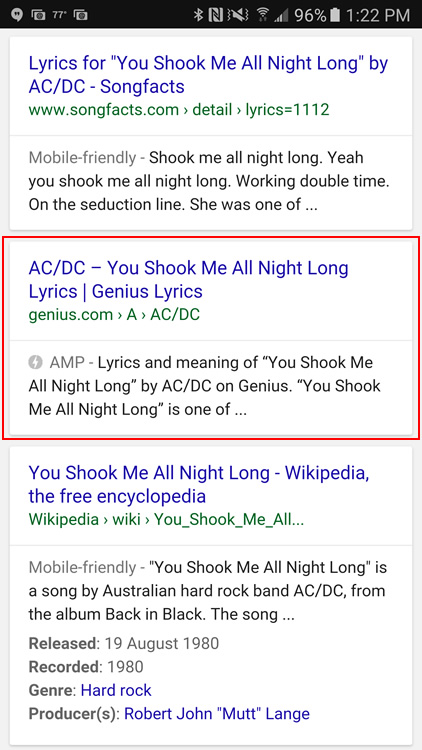 Out of 44 responses, only three people answered the question accurately. Almost all respondents answered “I don’t know” or some variation of it.

Here is a sample of the responses:

No idea what amp means.

Something for mobile phones.

I am not familiar with the acronym. I only know of one “amp” related to music, but I’m certain this has nothing to do with this music website.

I believe it to mean some sort of quicker connection. AMP with the electric bolt.

My first thought is that the page is amplified … plays music, perhaps or has extra content that amplifies it some way. But this is likely not correct.

First look, I have no clue, but think something to do with publishing?

I don’t know what AMP means.

It doesn’t mean anything to me. First thought was some kind of electrical “amp”.

Amplify? I actually have no idea.

I’m actually not sure what that means.

AMP seems like it may be the name of a music website, especially in the context of music lyrics. Or it could stand for some kind of premium service, like a result that is “amped-up” beyond the regular result. It adds a little confusion because I’m not clear what it is that I’d click on.

I don’t know what it is.

It looks like an acronym for some group related to music and copyright.

Question 1 Recap
After seeing the responses, I couldn’t help but think that the low click through rates some sites are seeing could be due to overwhelming confusion about what AMP is. Only three people knew what it was, and most had no idea. And then you have “mobile-friendly” sitting right below it, which is extremely clear about what it means for users. That’s a great segue to my second question.

Question 2 – Which result would you choose?
The second question simply asked respondents if they were on their phone, would they be more apt to click the AMP result or the “mobile-friendly” result below it.  I also provided a third option that read, “I don’t care about which tag is displayed.”

Out of 44 responses, 29 chose “mobile-friendly”, 13 selected “I don’t care which tag is displayed”, and only 2 people chose the AMP listing. 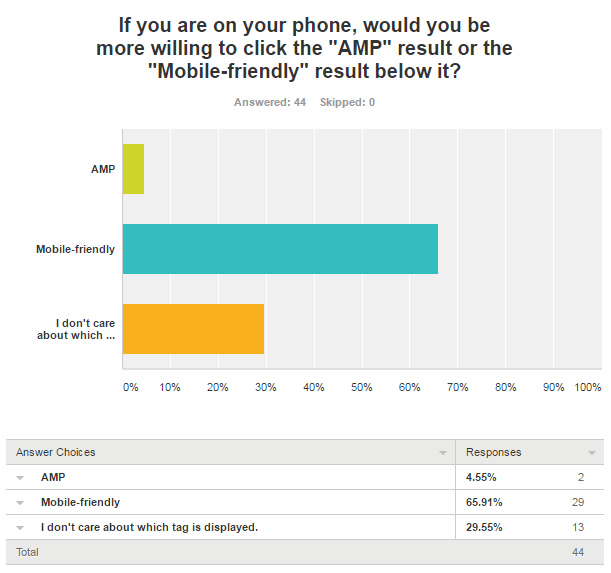 Again, I’m not saying my poll represents the entire world of internet users, but it could represent more than you think… I’m not sure what I was expecting from the results, but I sure wasn’t expecting only three people to know what AMP is, and only two to say they would click the AMP result versus other listings.

What this means for Google
OK, so we know Google is pushing AMP hard and we know that AMP provides a lightning-fast version of the content. That’s great, but the other piece of the puzzle is having users actually know about that, and then select it in the search results. And based on my poll, I can’t help but think that AMP has a branding problem.

The acronym doesn’t mean anything to many internet users as of now, while “mobile-friendly” is much clearer. I’m sure Google is testing this across many users, but I personally believe the icon and message in the SERP needs to be clearer to users. They need to understand the benefit first, before they click through. I don’t know if the tag should say, “Really Fast on Mobile” or “Amplified For Mobile” or “Loads Instantly”, but I don’t think it should remain as just “AMP” with a lightning bolt. Maybe Google could move towards that once more people understand what AMP actually is.

Also, and this was staring me in the face in the demo Google rolled out, but they might provide a clear message at the top of the search results once accelerated mobile pages roll out to the full SERPs. For example, check out what the demo shows below. See the blue box at the top with a message about AMP? That would be smart to run for a while when AMP hits the search results. 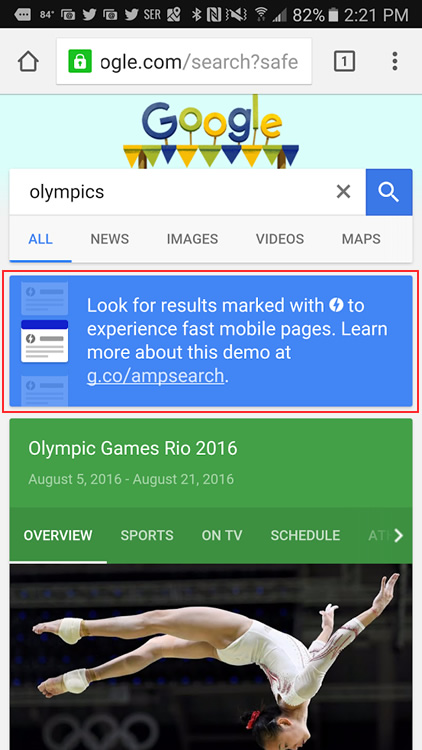 Summary – Don’t forget about user perception when rolling out AMP
AMP is hot, Google is pushing it hard, and it provides an incredible, near-instant loading experience for mobile users. But there’s a chance that many users have no idea what AMP actually is. In addition, there are “mobile-friendly” results right above or below AMP listings in the SERPs. And it seems many are more willing to click the “mobile-friendly” listings versus AMP.

I would keep this in mind when deciding whether you should roll out AMP on your own website. There are some publishers claiming low click through rates for AMP articles, and now we may know why. I hope Google addresses this soon, and before AMP hits the full search results. And when AMP moves from demo-form into the full search results, we’ll see if it ends up with an AMP tag with a lightning bolt, or a clearer message for users. Time will tell.

Until then, I recommend polling your own friends and family. See what they say and understand which listing they will click on. You might be surprised what you find. I sure was.