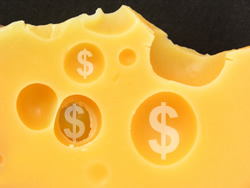 Hi. My name is Glenn Gabe and I’m lactose intolerant. That’s right, me and about 40 million other Americans. Although it’s not the worst thing that can happen to you, it’s definitely a bit of a downer. I was 32 when I figured out that I was lactose intolerant, and that’s also when I learned how much of a nuisance it was to exclude certain foods from my diet. And those foods were some of my favorite things to eat, including milk, cheese, pizza, ice cream, to just name a few. Cheese, in particular, is in so many foods and meals that you eat on a regular basis, that it’s almost impossible to avoid. Now, that’s assuming that I really do have to avoid cheese. More on that shortly.

What is Lactose Intolerance?

For those of you not that familiar with lactose intolerance, here’s a quick rundown. Lactose is the sugar found in milk. Lactase is the enzyme that your body produces to break down lactose. Lactose intolerant people don’t produce enough lactase to break down the lactose they ingest. And if it’s not broken down, it causes problems (to varying degrees). For most people the symptoms aren’t horrible, but can be more of an annoyance. Since milk is a core ingredient of cheese, you would think that cheese would cause serious problems for lactose intolerant people. Not so fast…

Cabot is Sharp (And I Mean Smart)

I was making lunch about a month ago when it happened. I’m typically stuck using some flimsy science cheese for my sandwiches or choosing from the anemic selection of lactose free cheeses available. That day my wife ended up taking out her favorite cheese, which is Cabot Extra Sharp Cheddar. By the way, that’s like dangling a gourmet sandwich in front of a person that’s been stranded on an island for 5 years. :) After a quick glance at the cheese, I wiped the drool from my face and went back to my science project, I mean lunch. That was until my wife glanced at the side of the Cabot packaging. She noticed a small message on the side of the package that read “Lactose FREE”. Huh? I dropped my sandwich on the floor and ran over. Was this a mistake? Are they messing with me? I checked to make sure I wasn’t being punk’d and then I started doing some research.

After doing some searches, I couldn’t believe what I was reading… It ends up that MOST aged cheeses are lactose free. From what I gather, the aging process yields cheese with either very low amounts of lactose or 0 grams of lactose. That includes cheddar, swiss, romano, provolone, etc. Needless to say, I was ridiculously excited. I’m not sure if all the cheeses listed have 0 grams of lactose, but most have such a low amount that they cause no problems for lactose intolerant people.

Where Were The Cheese Companies?

Then it hit me…why in the world aren’t cheese companies promoting this? Is there some reason they don’t want people to buy more of their cheese? Why didn’t I know about this? And why doesn’t the greater lactose intolerant community know more about this? I know quite a few people that are lactose intolerant, and I’m convinced that few of them actually know what they can and cannot eat! While doing my research, most of the search results were to forums and question and answer sites where people like me were asking questions about lactose free foods. Almost none of the major players in cheese ranked for the topic. Finlandia did have a page about how its cheeses were naturally lactose free, which is great, but I think more needs to be done…

The Revenue Implications of Smart Marketing

I couldn’t help but think of the massive revenue impact of effectively promoting this message to targeted people. How could cheese marketers get the word out via a number of channels?

I don’t know about you, but a target market of between 30 and 50 million lactose intolerant people provides a pretty darn good opportunity. And the fact that many of those people are dying to eat the foods they once loved (like cheese) makes it even a stronger opportunity. If cheese manufacturers or the cheese industry, decided to launch a thorough marketing and education campaign, I can only think they would strike gold. Simply getting the word out that most cheeses are low in lactose, and many are lactose free, could be a windfall for the cheese industry. There’s actually nothing to sell… your target market wants to eat cheese. They just can’t eat it (or so they think). A well-crafted campaign combining TV, Viral Marketing, Social Media Marketing, Search Marketing, Blogger Outreach, etc. could be huge for the cheese industry. It could be a cheese extravaganza!

Here’s an example of how simple it could be given the desperate eating state of most lactose intolerant people are. Jim and Laura work together:

Laura: Yes, unfortunately I’m lactose intolerant… Are you rubbing it in?

Jim: No, I just saw a video on YouTube explaining that most cheeses are low in lactose and many have no lactose at all… You should check it out.

Laura: WHAT?? Get out of my way! {She tackles Jim to get at his computer, clicks play on YouTube and shoots out the door to the store to buy 16 blocks of aged cheese.}

Let’s do the math. If you reached even 25% of lactose intolerant people in the United States, and they ended up spending an additional $15 per month on cheese, then you are looking at a lift of $1.8 billion per year. That’s a lot of cheddar, pun intended. :)

40 million lactose intolerant people in the US

If I ran marketing for a cheese company and I was looking for ways to increase revenue, I would launch a killer campaign that engages the lactose intolerant market. Why try and get a .5% lift from the people who already buy and eat cheese when you can get a much greater lift from people that are dying to eat cheese, but just THINK that they can’t.

Now that would be sharp. :)