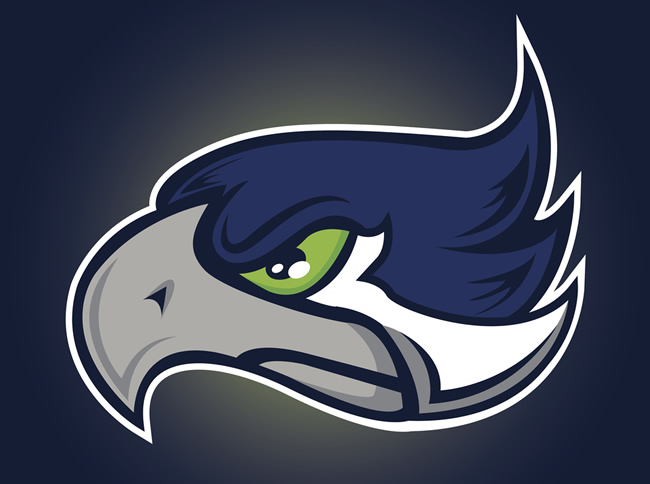 {Update: It happened again. I just surfaced a featured snippet for “eagles uniforms” that was based on the color rush uniforms they wore in last night’s game (12/22). So it seems this was not an anomaly, but something that can happen based on breaking news. I’ve provided a screenshot below in my post.}

I’ve been fascinated with featured snippets since they hit the Google search results, and I’ve written a number of posts about them over the past few years. During that time, I have conducted a boatload of research to determine when they get surfaced, how quickly that happens, how to win featured snippets, and how to retain them.

The reason I’m so fascinated by featured snippets is simple. Based on their placement and SERP treatment, they can end up driving massive amounts of traffic to websites, while also building near-instant credibility. When digging into the data, it’s hard to overlook the power of Google featured snippets.

A Temperamental Algo
One thing that has stood out is how temperamental the featured snippet algorithm is. I’ve seen sites gain featured snippets, only to lose them to another site, then regain the snippet, only to lose them again. And all of this can happen very quickly. Based on my research, it seems the algo is continually looking for the best answer, even if it continues to change, swap results, grab completely new results, etc.

In addition, featured snippets can be personalized. That means that the snippet you are seeing might not be the one your friend is seeing down the street. So featured snippets are even more dynamic than most people think. Here’s a great example that was initially covered on Search Engine Roundtable. It shows a featured snippet for the query, “er wait times” and shows the emergency room closest to the person searching: 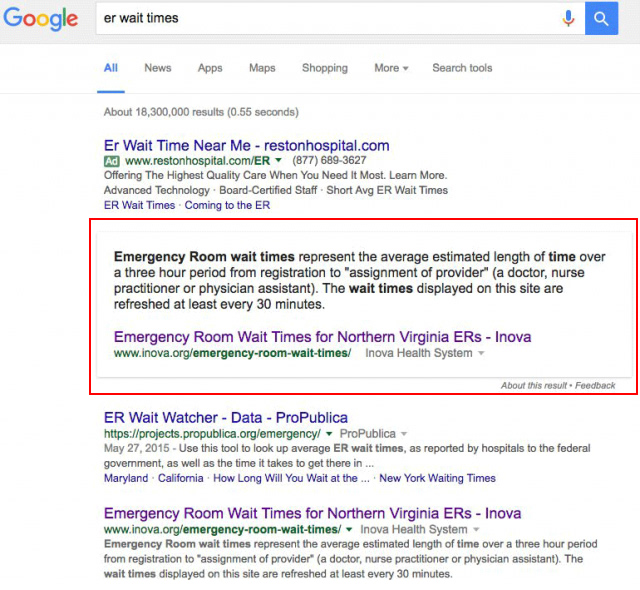 So we know featured snippets are dynamic, they can change quickly, and they can be personalized. But how fast can they be surfaced, displayed, and change based on breaking news? For example, if there is breaking news, how quickly can Google return a featured snippet containing the latest information for the topic? Well, I recently saw some examples of this happening and they blew me away.

Although the example below is focused on sports, this might be happening across categories. And with the recent news of featured snippets being shown more often in the SERPs, I’m wondering if featured snippets based on breaking news are impacting those numbers. I’ll see if I can find more examples of this across other categories. If I do, I’ll update this post with more information.

Anyway, the Seahawks went on to crush the Rams 24-3, but I couldn’t help but think many people were firing up Google to learn more about the bright green uniforms. The next morning I was explaining the uniforms to my kids, why the Seahawks were wearing them, etc., and I decided to quickly Google “seahawks uniforms” to show them what the uniforms looked like.

And boom, I saw a featured snippet for the query that returned an article written at game-time. That’s pretty amazing, considering the article was published right when the game was starting, less than twelve hours before I searched! Note, there was already a featured snippet for that query, but it wasn’t based on the color rush uniforms from 12/15. The new snippet focused on that topic, but from an article that was just written. 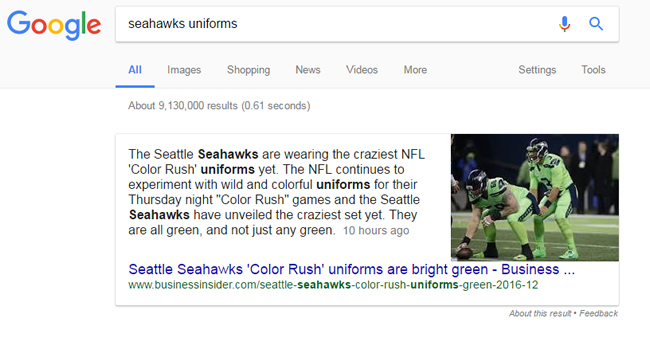 I shared the screenshot on Twitter and then decided to check back a few hours later. And boom, I saw the featured snippet had changed already to another story written on 12/15! Wow, that was fast. Here’s what it looked like just a few hours later:

So, we see that information for featured snippets can be surfaced extremely quickly when Google sees a lot of query demand, but we also see that the algo is continually working to surface the best snippet possible (so it had already changed the snippet just a few hours later). Basically, the latest news about “seahawks uniforms” was already surfaced in the featured snippet.

The Plot Thickens With Personalization
Later that day I checked back again, and the original featured snippet was back! Yes, it changed once again. Remember my comment earlier about the temperamental algo? So I tweeted that the snippet had changed once again and received an interesting reply from someone on Twitter.

It’s hard to say exactly what was going on, but we could have been seeing the personalization aspect of featured snippets in action. See below: 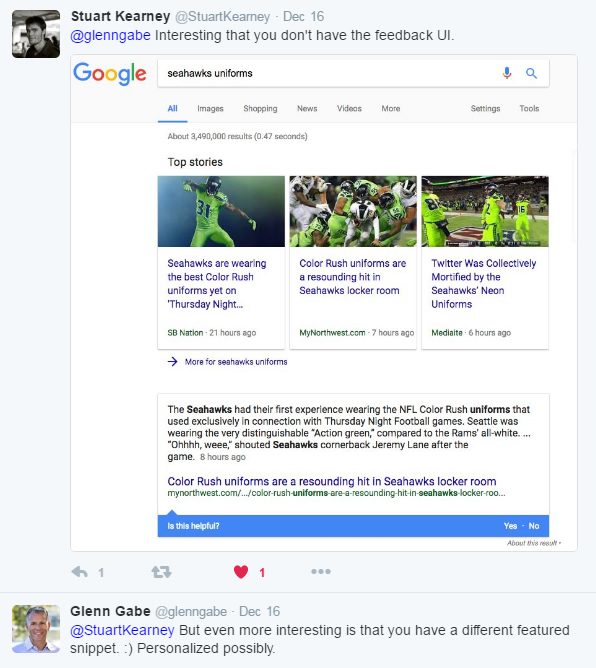 Featured Snippets Based On Breaking News – Anomaly or New(er) Feature?
This was the first featured snippet I have seen with information based on breaking news, so it definitely caught my eye. Now, Google recently explained that it was using human-assisted AI to train its featured snippet algorithm to surface the best upshot from articles (for snippet descriptions), so that could also be in play here. It’s hard to say for sure, but it’s entirely possible. The timing is very interesting, to say the least.

{Update: Well, it happened again. I just surfaced a featured snippet for “eagles uniforms” based on the color rush uniforms worn last night by the team! So it seems this is not an anomaly, but something that can happen based on breaking news. See the screenshot below:} 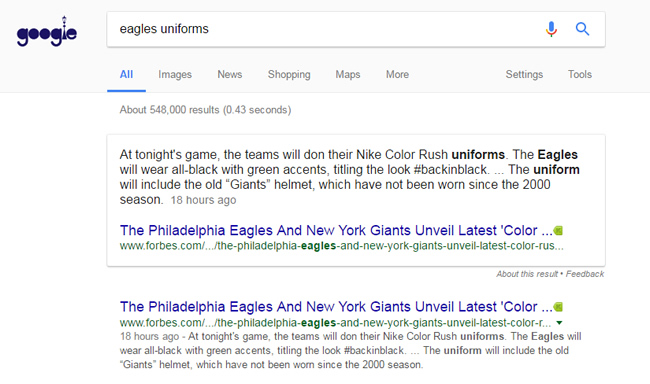 Yet Another Example, Also From The NFL!
So I picked up another example this week when the NFL pro bowl rosters were released. I quickly wanted to see the list and performed a quick Google search. As you can guess, I saw a featured snippet containing the information! It was another great example of blazing-fast featured snippet customization by Google. It’s weird they were both about the NFL, but hey, there was some hot NFL news recently.

Similar to the example above, there was already a featured snippet showing, but Google was now pulling the most recent information (and quickly). See below: 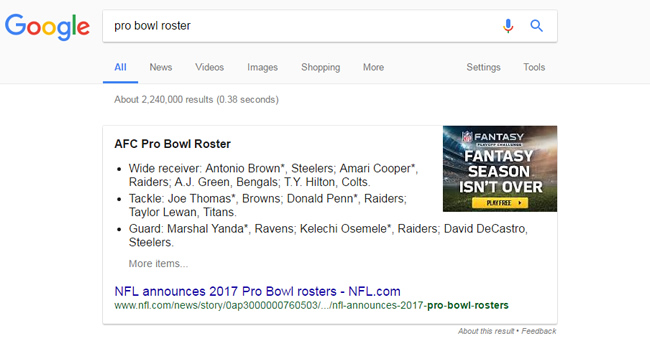 Again, it seems featured snippets are being shown more often (based on data from Mozcast and RankRanger). You can read Barry’s post on Search Engine Roundtable for more information about that. So maybe these new(er) featured snippets based on breaking news are contributing to the increase. Hard to say at this point, but worth noting.

What This Tells Us About Featured Snippets: