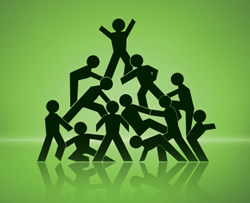 There are times companies hire me to evaluate their online marketing strategies. Essentially, they want to better understand the potential impact of their efforts and if there are any holes in the strategy at hand.  When an idea for a viral marketing campaign crosses my desk, the first thing I like to do is gain access to the company’s web analytics package and start analyzing site performance.  Based on the hit or miss nature of viral marketing, my hope is that I immediately see a consistent level of quality traffic (based on conversion) from a number of traffic sources.  Unfortunately, that’s not always the case and it’s the first red flag.  Then, since viral marketing campaigns usually need a kick-start, I review how strong of a presence the company has on various social networks.  Again, my hope is to see a solid presence and strong engagement via blogging, Facebook, Twitter, etc. Once again, that’s not always the case and could be extremely problematic for the company I’m helping.  Based on what I explained above, here’s a question to think about (and one I’ll address in the rest of the post):

Why in the world would a company spend a lot of money, time, and resources on a viral marketing campaign without already having a solid online marketing foundation in place?

In my opinion, and based on my experience, the company pulling the trigger on the viral campaign without having a foundation in place could very well be setting itself up for failure.  If my analysis reveals a lack of consistent, quality traffic and a poor presence on social networks, then I believe the plan needs to be adjusted (in a big way).  I usually recommend that they spend the budget allocated for viral marketing on building a solid online marketing foundation instead.  Then, once the foundation is in place, the company can layer viral marketing on top of that foundation.  Let’s explore why.

Consistent Quality Traffic, A Critical Element To Your Online Marketing Success
I explained earlier that I usually dig into a company’s reporting to better understand their current traffic sources and quality of traffic.  In my opinion, when it comes to driving traffic, there are too many companies focusing on short-term gain versus building a long term strategy.  There are some people that want a quick win, but that’s definitely not a great way to look at online marketing.  If you develop the right strategies, you can build a long term plan for driving consistent and quality traffic via a number of traffic sources (building the solid foundation I have referenced numerous times in this post so far).  For example, organic search could be driving targeted visitors across tens of thousands of keywords on a regular basis.  And by the way, there is no ad spend for that targeted traffic.  In addition, a well planned SEM strategy could yield high quality traffic across a wide range of targeted categories and keywords in paid search.  Also, SEM could supplement your SEO initiative, enabling you to provide air cover for SEO as you strengthen your organic rankings.  Also, if you want to consistently drive customers back to your site, then building a well-scrubbed in-house email list is a smart move.  I haven’t even mentioned RSS subscribers, Facebook fans, Twitter followers, other social networks, etc.  This foundation (which includes a number of online marketing channels), is worth its weight in gold.  If you don’t already have a foundation in place, then building it should be your focus, not creating a viral marketing campaign. You can get to the viral marketing campaign later on…

If  You Are Lucky, Viral Marketing Provides a Spike in Visitor Traffic, Then a Quick Falloff:

Viral Marketing Fails More Than It Succeeds
Based on what I just explained, you can understand why I’m sometimes shocked to see a viral marketing plan planned when a strong online marketing foundation hasn’t been developed yet.  Think about it, why wouldn’t you spend that budget on building a strong foundation versus spending it on a short-term viral marketing campaign?  And by the way, that viral campaign will likely fail performance-wise.  I’m not saying that viral marketing can’t be successful, but viral marketing fails more than it succeeds.  When most people think of viral campaigns, they tend to just remember the successful ones.  Nobody remembers the campaigns that bomb, which makes sense since those campaigns never went viral!  :)  Also, there are times that a successful viral marketing campaign was preceded by dozens of other attempts that failed.  The fact of the matter is that you never know what will go viral.  It’s hit or miss, and your business shouldn’t heavily rely on “hit or miss” as its core online marketing strategy.

Although I help companies with brainstorming ideas for viral marketing campaigns, I would never recommend a viral campaign if the other (and more powerful) areas of online marketing weren’t covered already.  In addition, even if you end up having your campaign go viral, that doesn’t necessarily translate to outstanding financial performance.  If your goal was just exposure or links, then that’s fine.  But, if your goal was conversion, then you might not be so thrilled with the results.  That’s why if you clearly understand your goals, you can better structure your online marketing campaigns to reach those goals.  That might sound obvious, but tying strategies back to your core goals can help keep you on the right path and avoid the inevitable: a funny video with 100 views on YouTube, a fan page with no fans, and an empty Twitter account only followed by a few spammers.

Social As Your Launching Pad
Earlier I mentioned the importance of social media marketing on the impact of viral campaigns.  The reason is simple.  If you want something to go viral, there’s not a better way to get the word out to a wide range of targeted people than via Facebook, Twitter, Blogging, etc.  But, it’s much easier if you already have a strong following when you launch your campaign. If you have that following across social networks, then you have a much greater chance of gaining traction.  And traction is exactly what you need in order to spark your viral campaign.  Without the spark, you might just end up in the viral marketing deadpool.  And that’s not a pretty place to be.  :)  By the way, read my post about The Twitter Effect on SEO to learn how Twitter can impact traffic, inbound links, and rankings in organic search.

Try Kick-Starting Your Viral Campaign With The (Lack of) Social Media Presence Listed Below:

Unfortunately, many companies haven’t spent the time to build a presence across social networks.  They might have quickly set up a Facebook page, a Twitter account, a shell of a blog, and subsequently they have nothing to leverage when their viral marketing campaign goes live.  Compare that situation to a company that already has 10K fans on Facebook, 7500 Twitter followers, thousands of blog subscribers, 400 subscribers on YouTube, etc.  Having that following across social networks will greatly improve your chances of getting the word out quickly about the viral campaign.  On the flipside, if you practice drive-by social media (or don’t participate at all), then you won’t have a foundation to leverage when your campaign launches.  Drive-by social media is the practice of quickly setting up accounts at social media sites and then dropping a message about your own content or campaigns.  It never works and is embarrassing for agencies and companies that do it… Instead, you should build fans, followers, and subscribers the right way, which will enable you to reap great rewards from your hard work.  And you just might see that message go viral…    The core point to remember is that you want to build your following BEFORE your viral campaign goes live and not as it goes live.