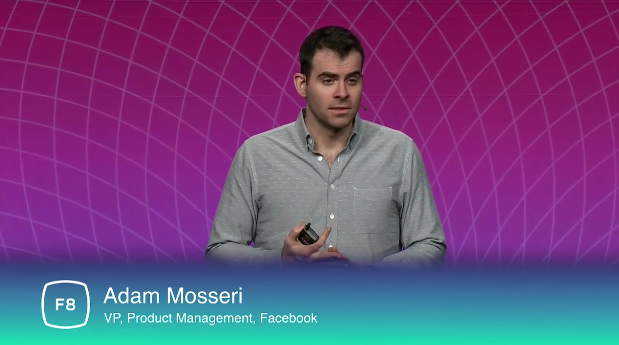 Although many people associate algorithms with Google, Facebook also has many algorithms running on a regular basis. And I can’t think of one more important than its News Feed algorithm. That’s what determines the posts and updates you see when you log into your account. With most people having hundreds of “friends”, while also liking many Pages and publishers, the News Feed has gotten very crowded over the past few years. So, Facebook uses an algorithm to determine what shows up, and in which order. And that order can have a serious impact on businesses trying to reach a targeted audience.

For example, if your posts end up ranking highly in the News Feed for many people you are connected with, you can get in front of a lot of eyeballs and end up with a boatload of targeted traffic. That can impact ad revenue, sales, sign-ups, or any number of conversions that apply to your business. If your posts end up ranking low in the News Feed, then you have little chance at gaining those eyeballs.

As you can guess, many wonder how the News Feed algorithm actually works. In other words, what does Facebook take into account when ordering the News Feed? Well, at Facebook’s F8 conference this year, Adam Mosseri, the VP of Product Management for News Feed, presented that very topic. And even better, Facebook recorded a video of his presentation. The presentation was short, but contained some key pieces of information about how the News Feed works. So I decided to take some notes based on Adam’s slides, including the time of each statement.

I highly recommend you watch the video for yourself. There are some great bits of information about how Facebook’s News Feed ticks. Below, you’ll find my notes along with the timecode of each section (so you can jump directly to those parts).

Notes from Adam Mosseri’s presentation about how the News Feed works:

0:50 When The News Feed Algorithm Kicks In
Adam explained that when a publisher first posts a story on Facebook, nothing happens from a News Feed algo perspective. The algo only kicks when someone that is your friend or follows your page logs in and has an opportunity to see your post. That’s when Facebook looks at that story, and all of the other stories that can be shown to those people. Then they are all evaluated by the News Feed algorithm.

1:20 The Number One Input (and it makes sense)
Yes, basic and obvious, but worth noting. The number one input in the News Feed algo is who you friend and which publishers you follow. This is pretty obvious, since that’s the basis for seeing any update on Facebook. For example, if you don’t follow a publisher or have someone as a friend on Facebook, you can’t see their post (or a post they have engaged with) in your News Feed. 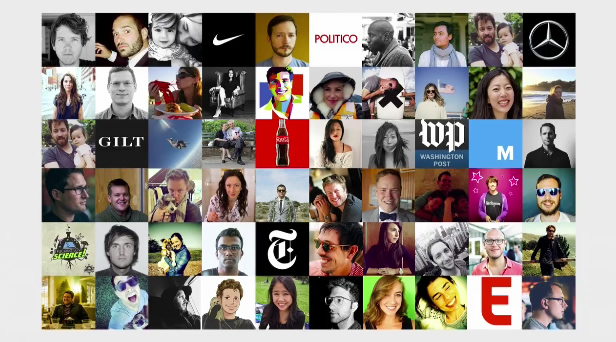 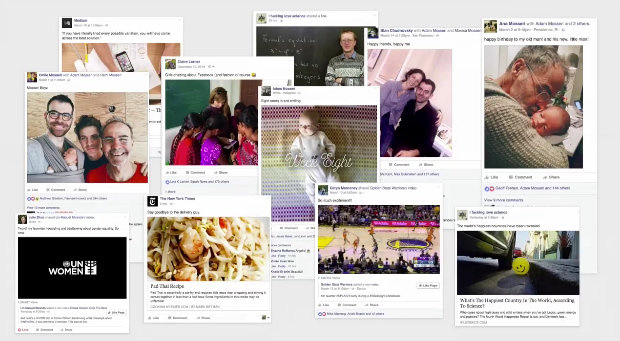 2:44 Strongest Facebook News Feed Signals/Factors
Facebook then predicts if a user will take these actions based on a number of factors. The top signals include who posted the update, the amount of interactions on a post (i.e. likes and comments), the type of content (photos, video, etc.), and your previous actions with that entity on Facebook (your friend or publisher you follow). For example, how much has a user engaged with that person or publisher?

And the News Feed algorithm definitely takes recency into account (although importance of a post will trump recency). “Recency is a really important signal for relevance, but it’s not the only important signal.” Adam gave a simple example of his cousin that got engaged on a Friday, but he hadn’t been on Facebook since then (a few days). Then this morning his brother-in-law posted his breakfast sandwich. Facebook’s New Feed algorithm would determine that he was more interested in his cousin’s engagement versus the breakfast sandwich. So relevance beats recency in a number of situations. 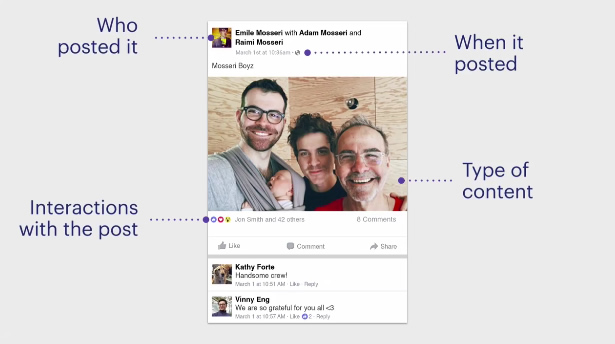 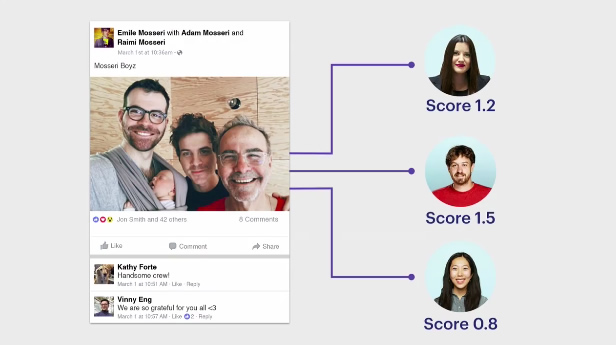 5:00 Facebook Receiving Feedback About News Feed Quality
Facebook has two primary mechanisms for receiving important feedback about the quality of the News Feed. It looks at what people do and then what people say. First, Facebook can see what users are doing. Are they liking and engaging with the content? Are they spending time on the site, and with specific posts? How much value are users gaining from the content in their News Feed?

But, Facebook knows there are certain types of posts where engagement might not happen. For example, a post about someone’s dog that passed away. A person might not engage with that post, but it’s still important to them. That’s where Adam brought up the Feed Quality Program, which has two components.

The first is the Feed Quality Panel, which includes many people that organize their own stories based on interest. Then Facebook can compare their order to how the News Feed would have picked the order. For those heavily involved in SEO, this is very similar to Google’s Quality Raters. 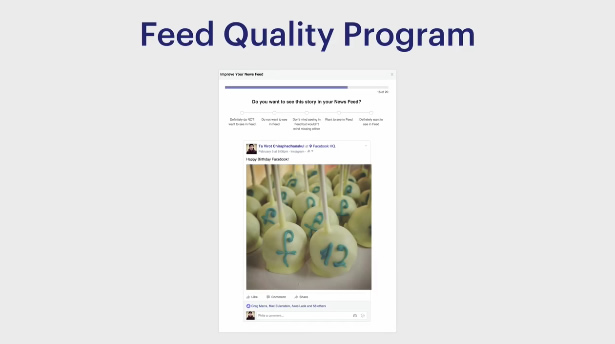 6:30 News Feed Controls For Users
Facebook knows they always don’t get it right… which is why Facebook introduced controls for users. Adam explained the various controls Facebook has created for users (so they can tailor they own News Feeds). For example, he explained the importance of following and friending (and that it’s very clear how they work). Second, Adam explained that unfollowing is important too. By doing so, your News Feed experience “will get more interesting”. You can also hide any post in the News Feed, and Facebook will try and show you less of that type of post in the future. Again, making your News Feed experience more interesting. Last, he mentioned “see first” (which I love by the way). Using “see first”, you can select people or publishers that you find the most interesting (and who you want to show up at the top of your News Feed each time).

Adam explained these controls can help “correct” Facebook and make the News Feed more relevant over time. I thought that was a great statement. Hey, anyone in SEO can tell you that algos aren’t perfect. :) 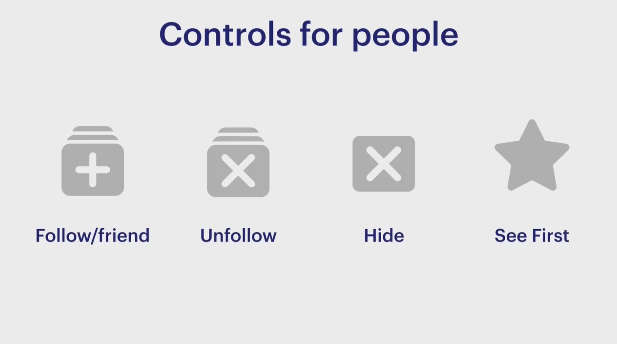 7:30 What This Means For Publishers
Adam ended his presentation with some tips for publishers. First, he said to create compelling headlines. He made sure to say that he did not mean click bait headlines… He said to give people a real sense of the content behind the headline. For example, be clear and honest (but still compelling). He explained Facebook knows that “people really enjoy this type of content and that Facebook does what it can to make sure it does well in the system.”

Third, and most important according to Adam, he explained to experiment and try new things. “What’s best for your audience is probably not what’s best for a different publisher’s audience.” He said to experiment with long-form content, short-form content, video, images, try different tones, etc. The point is to see how those changes work for your specific audience, which leads to Adam’s final tip about publisher tools — analysis.

In order to analyze how well your efforts are working, Facebook provides a set of publisher tools that can help you understand what’s resonating with your audience. For example, analyze posts to view engagement, reach, and more. 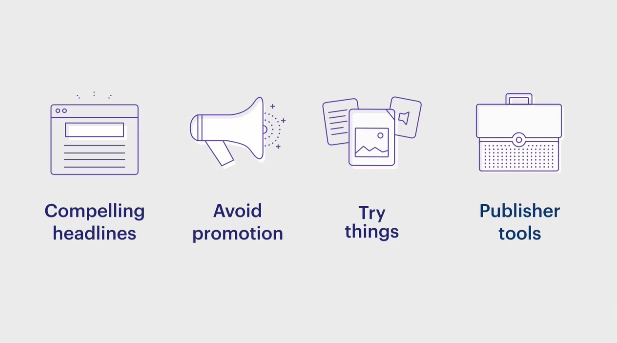 8:30 Adam Highlights Audience Optimization Tool (Part of publisher tools.)
After running through his tips, Adam called out Facebook’s Audience Optimization Tool as a great way to help tailor your posts to specific segments of your audience. You can tell Facebook what your specific update is about and then Facebook will use that information when considering how interesting the post will be for specific followers. In other words, Facebook will try and match the post up with people that have already shown an interest in that specific topic.

And last, you can analyze insights based on using the Audience Optimization tool to see what’s working and what’s not. And then based on the performance, you can experiment with refining your targeting to make sure you are driving the most engagement from your posts. 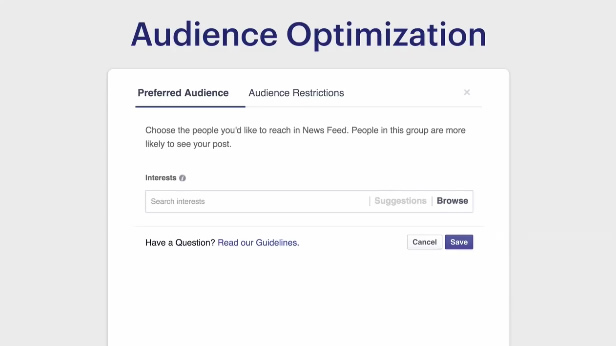 Summary – News Feed Information Directly From The Source
I love when people directly from Google or Facebook explain how their algorithms work. Adam’s video, although short, provided some interesting information directly from the person leading product for Facebook’s News Feed. Again, I recommend watching the video, reading through my notes, and then mapping out a plan of attack for your own efforts on Facebook. And if you have any questions or comments, feel free to provide them below!