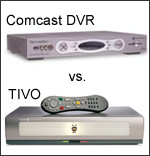 I’m a big fan of TIVO, but when HD Tivo’s are going for $800, I naturally had to take a look at the Comcast HD DVR. I wasn’t thrilled that I had to do this, but $800? I’ve been using Comcast’s On Demand service for years now, but wasn’t thrilled with the speed and the functionality of the service. I naturally thought that the DVR would be similar, so I’ve stayed away. OK, I was wrong. Read on.

TIVO has been a part of our lives for over 3 years now (since my daughter was born). We knew that time would be limited for watching TV, so we thought it would be smart to watch the shows we like when we want to watch them. It has been an invaluable gadget for us…even my daughter understands that we can rewind a show, that the Wiggles record every day, and that we can zip forward through commercials. (Sorry advertisers.) :-) That said, I really didn’t want to spend $800 on an HD TIVO. So I called Comcast. On one Saturday, I picked up the new DVR, pulled out one of my TIVO Series 2 DVR’s, and started testing out the Comcast DVR. We’ve been using the Comcast DVR in our family room for a few months now and my findings are below:

Tivo was relatively big, a second box that needed space, and was slow to react…more about the reaction time soon. With the Comcast DVR, you only need space for the cable box, which made my wife extremely happy! It’s also darn fast, which TIVO wasn’t. There was always a lag between changing stations with TIVO and it’s communication with the cable box. In addition, there were times that TIVO thought the channel had changed, but it didn’t. Then it would record a show we didn’t want thinking it was recording the correct selection… This annoyed the heck out of us, but didn’t happen often, probably twice per month on average.

At $10/month for the Comcast DVR, there’s not a big investment and it’s covered by Comcast (if something goes wrong, you can call the cable company to come fix it or replace it). Compare this to TIVO HD at $800 and if it breaks, good luck. I’m sure you could call TIVO and have someone repair it (maybe), but knowing Comcast is right around the corner is nice.

Yes, TIVO has an HD box, but the Comcast DVR is less expensive, easy to integrate, and I was recording and watching HD footage the same day I picked up the DVR. On a somewhat related note, who else can’t wait for all stations to be broadcast in HD?? It’s hard to look at standard definition when you turn the station from HD. Am I wrong? :-)

This bothered us greatly with our TIVO Series 2 DVR’s. I love being able to watch one show and record another. It makes sense, right? Let’s say I’m watching the US Open and Tiger is on a tear. If the Yankee game comes on, why do I have to change the station? This is what happened with our TIVO… This feature with the Comcast DVR is really nice. It would be hard to revert back…

What I don’t like about the Comcast HD DVR:

You have more functionality with TIVO, and sometimes it’s the little things that you miss. For example, I cannot jump forward in 15 minute increments like I could with TIVO. So, if you recorded an hour long show and you want to hop to the last 15 minutes, good luck. You might actually have a seizure watching the footage zip by at full fast forward speed (which is still a minute per 1 or 2 seconds.) I also liked the ability to watch something in slow motion. This isn’t available on the Comcast DVR. There is a series pass, like the season’s pass on TIVO, so that essential bit of functionality is there. I do believe Comcast will keep enhancing their software, so this might not be much of an issue down the line. Right now, however, TIVO wins the software battle.

At first I thought it was my TV, but doing some Google searches revealed many other people having weird audio problems and freezing issues with their Comcast DVR. For us, the annoying little problem is that the audio goes out and you cannot get it back without switching sources or turning off the TV and then turning it back on. So, I switch from HDMI to AVI and then back and the audio comes back on. Yes, this is annoying and I hope Comcast figures it out…

At 100% capacity, our Comcast DVR is holding about 40 hours of footage (mixed between HD and standard definition). It’s ok, but we would obviously like more space. It hasn’t been a big problem yet, but I can see it becoming a problem down the line if the space issue isn’t addressed. We don’t watch a huge amount of TV, but we like to record our favorite shows, which are mostly in HD. Then we have our daughter’s shows, mostly in standard definition. My son isn’t old enough yet for TV, but when he gets involved, we will definitely need more space. I’m assuming that Comcast will keep increasing the space as their service becomes more robust, but it’s worth noting now.

In closing, as a TIVO fan, dare I say that my experience with our Comcast HD DVR has been…pretty darn good?? Well, it has and I need to call it like I see it! There has been a lot of talk over the past few years about TIVO’s lifespan (or lack thereof). I’m not exactly sure what the company has planned and which areas they will focus on in the future, but I can tell you that if I switched to the Comcast DVR, many others are going to do the same. I’ve told countless people over the past 3 years about TIVO (with my very own mini Word of Mouth Marketing campaign), but I feel much less connected with the TIVO brand right now… I’ve still got a TIVO Series 2 in another room in my house, but it’s been getting less and less attention. Do you think it knows that Buzz Lightyear is downstairs recording some HD right now? ;-)