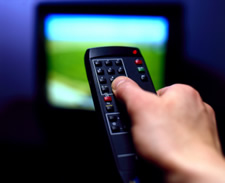 Or does that really matter? More on that later. First, I’m a big DVR user and have been one for a number of years. I bought my first TIVO about 5 years ago, quickly added a second, and then moved to the Comcast HD DVR last year. So, I read an article in late February about a study conducted by General Electric’s NBC Universal to document the recall power of TV commercials when DVR users were whipping through them at 6x speed. In other words, do you recall an advertisement as you are fast forwarding through commercials on your DVR? By the way, that’s exactly how I watch the shows I record. In addition, if I choose to watch a live show, I just start watching the show 15 minutes in (for a 1 hour show) and then I can still fly through the commercials. Now back to the testing. The following quote is directly from the Wall Street Journal article:

Tracking biometric measurements such as eye movements, heart rate and sweat, the study found that the ads people concentrated on the most and recalled the most shared several traits. The most successful ads concentrated the action and the brand’s logo in the middle of the screen, didn’t rely on multiple scene changes, audio or text to tell the story, and often used familiar characters. People were also more likely to remember an ad in fast-forward mode if they had seen it once before live.

Glenn’s translation: A big static logo in the center of the screen. ;-)

Uh, tracking biometric measurement?? OK… The most successful ads didn’t rely on audio to tell the story?? The more I think about this topic, the more I think that this entire study wasn’t necessary. I guess it was for networks trying to hold on to TV advertisers at all costs, right?

So, I decided to conduct my own study. That’s right…and without biometric measurements, my heart rate wasn’t monitored, my eye movements weren’t scanned, and my sweat glands weren’t checked! I flipped on my TV, drilled into my recordings, armed with a high tech toolkit for a high tech doctor of technology (a pad and pen) and started my first show. My goal was to fast forward through each set of commercials at the highest speed and see which ads I could recall. That is, if I didn’t go into convulsions first! :) Since every study needs a name, I am calling it “The Strobe Logo Study” conducted by Glenn Gabe, Technology Scientist at Large. ;-)

Without further ado, here are the results! I will also give my quick analysis of the results following the data.

I started zipping through the commercials at the highest fast forward speed. Believe me, the highest speed is darn fast…each segment of commercials was over in a few seconds. I remember seeing a flash of the Wendy’s logo (centered on screen), an Applebee’s logo and a Dunkin Donuts logo (both also centered on screen). More on ad positioning later. Each was up for a flash…probably a quarter (1/4) of a second. Also keep in mind that the three logos I remembered are big brands that have been advertising for years. This obviously helped with my recall of their ads.

The Sports Reporters on ESPN

The only advertisement I remember seeing was CDW. I saw this logo twice during the show and for a little longer than the logos in LOST. This intrigued me, so I rewound the show a little to watch the CDW ad. It ends up they sponsor the show (see, I didn’t know this because I never watched it in real time!) So, as a lead into the show, they have a voiceover say, “The Sports Reporters is sponsored by…CDW”. This takes a few seconds, which leaves their logo on-screen longer. I saw this twice during the show when whipping through it on my DVR. This is an interesting note for TV advertisers. Also, the logo was centered on the screen, an important factor during my scientific study. :)

American Idol on FOX (like I had to tell you…)

I remember seeing a Citizens Bank logo (I think) and an Infiniti logo. And, maybe…just possibly… a Lowes guy. Then again, it could have been a 7 Eleven guy or Wawa guy. I told you…it’s darn fast! Any quick movement or elaborate camera angles looks like a blur in fast forward. It makes sense, though. The common thread for TV commercial recall was becoming apparent. Any commercial that ended with a large logo centered on screen had a chance of recall (unless I blinked during the 1/4 of a second!)

Dancing With The Stars on ABC

I’ll cut to the chase…I recalled 3 ads, Advil, Petsmart, and a Nivea product shot. Again, each logo was centered on screen and fairly large (and the Nivea product was also large and centered). Are you seeing a trend here?

Here’s an interesting side note:

When you watch a recorded show, it will abruptly stop at a random frame at the end of the show…which is rarely when it fades to black. Dancing with the Stars ended on a BBC Worldwide America logo. So, since my DVR stopped on that frame, I saw this logo for about 10 full seconds before it returned to my DVR menu. If you are still looking for ways to appear in a DVR world, this could be one of them. BBC Worldwide America was not an advertiser, but that spot could be opened up for advertising…

I literally didn’t recall any specific advertisement… Not one. So, I went through it a second time to make sure my eyes weren’t just fried out of my head from the previous shows… Nope, not one ad, logo, brand, etc. I guess none of the commercials used a logo centered on-screen. Read on for my scientific analysis of my DVR study.

Is this what it’s come down to for TV advertisers?

Triggering convulsions in people to see if they remember a flash of a logo? Really? I know not everyone has a DVR (yet), but if this is the type of study we are conducting, then there’s something very, very wrong. I can hear the scientists who conducted the NBC Universal study now. {In my best European scientist voice} “Yes, it seems that even 1/8 of a second can impact your brand’s recognition in the mind of lowly consumers. TV advertising is still hugely powerful and we may turn to 60 strobe flashes of logos in the future versus 30 second spots. Sure, some people may be hospitalized from the flashes of light, but it’s all worth it if the Advil logo shows up, is recalled, and then helps the hospitalized person’s family overcome its collective headaches by using Advil.” OK, I’m a bit sarcastic, but it’s hard not to be!

How To Really Enhance Your TV Advertising, ONLINE

When I think of the cost to produce high end TV commercials, then the cost for airing those commercials, and then combine that with the growing number of DVR users, it doesn’t take a mathematical genius to understand why traditional TV advertising is not in good shape. I’m not saying that TV commercials should go away…but I believe that you need to supplement your TV campaigns with other campaign elements to maximize exposure and engagement. For example, I always recommend adding an online viral component to your TV commercials. Have a micro-site or landing page to engage your brand and advertisement, to help with lead generation, to work in a contest, to spark user generated content, to add a blog, etc. and then utilize online marketing channels to drive visitors there. So, combining your high end TV commercials with a robust micro-site, and then utilize paid search, organic search, email marketing, social media, blogging, display advertising, etc. to drive people there is a smart way to go. Then you’ve got yourself a serious campaign, covering all avenues, and using innovative methods. Versus…trying to justify your TV commercials with “flashes of a logo” or what I’m calling “The Strobe Logo”. There is so much you can do online to enhance your TV advertisements, and at a reasonable cost. To me, it’s a necessary addition that can unleash the true power of viral marketing.

Now let me go put an ice bag on my eyes and give my poor DVR and TV a break! Until my next scientific experiment, this is Dr. Gabe signing off. Does anyone know a good eye doctor? Maybe I should get in touch with the people who went through the original study to see who they recommend!

Disclaimer: I am not a medical doctor, scientist, or PHD. Please don’t ask me for medical assistance or to conduct clinical studies. If you need assistance from a medical doctor, please consult your healthcare company for a referral. I am not authorized to prescribe medication, recommend time off from work, or advocate medical procedures. :)